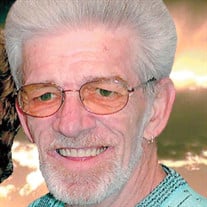 William L. “Bill” Swanson, 74, of Galesburg, passed away at his home on Thursday, July 30, 2020. Bill was born on August 20, 1945 in Galesburg. He was the son of Virgil W. and Leta R. (Reeves) Swanson. Bill married his sweetheart, Linda Gayle Hilton on July 3, 1964 at the First Baptist Church in Galesburg. Bill is survived by his loving wife, Linda Gayle at home; sons, Tony (Paula) Swanson and Todd (Carie) Swanson, both of Galesburg; Eleven grandchildren, Britney, Drew, Quentin, John, Mandy, Hailey, Stephen, James, Jeanette, Patrick, and Matthew; seven great-grandchildren; two sisters-in-law: Kathy Hale and Becky (John) Benson; and his best four-legged companion, Gizmo. He was preceded in death by his parents; sister, Rosemary; and brother-in-law, Richard Hale. Bill was a 1963 graduate of Galesburg High School. He worked at Gates Corporation as a Lead Press Operator, retiring after 36 years of service. Bill loved to watch T.V., eating out at restaurants, computers…especially shopping on Amazon. Linda never knew what surprises were held in his Amazon packages. He was an avid Bears fan. Most of all, Bill cherished the time he spent with his family. He loved taking trips and traveling with them. They were all blessed to be able to take one more trip with Bill to Branson two weeks ago. Bill will be greatly missed by those who love him. Cremation rites have been accorded. A memorial service will be held 11:00 AM, Tuesday, August 4, 2020 at Hurd-Hendricks Funeral Homes and Crematory, Knoxville. Visitation will be one hour prior to services at the funeral home. Memorials in Bill’s honor may be donated to the First Christian Church of Knoxville, 201 S. Broad Street, Knoxville, IL 61448. On-line condolences or expressions of sympathy may be made through www.hurd-hendricksfuneralhome.com To send flowers or a memorial gift to the family of William "Bill" Swanson please visit our Sympathy Store.
To send flowers to the family in memory of William "Bill" Swanson, please visit our flower store.