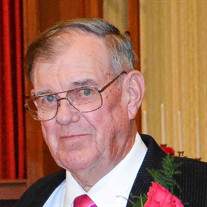 William R. “Bill” Shenaut, age 87 of Knoxville, Illinois died at 11:40 A.M. on Tuesday, September 26, 2017 at the Richard L. Owens Hospice Home in Peoria, Illinois. He was born on May 24, 1930 in Galesburg, Illinois the son of Robert C. and Elsie Harbinson Shenaut. He graduated from the Maquon High School. He married Mary M. Daly on August 25, 1957 in Rushville, Illinois. Surviving is his wife: Mary Shenaut of Knoxville, Illinois; two sons: William C. (Catherine) Shenaut of Knoxville, Illinois and David B. (Maxine) Shenaut of Mahomet, Illinois; one daughter: Lisa K. (Doug) Hutchison of Morton, Illinois; four grandchildren: Brad (Mindy) Shenaut of Galesburg, Illinois, Sarah (J.B.) Barrett of Knoxville, Illinois, Kassidy and Joshua Hutchison of Morton, Illinois; and one great-granddaughter: Camden Shenaut. Also surviving are his sisters: Delores (John) Erickson of Galesburg, Illinois, Barbara (Rich) Johnson of Gilson, Illinois and Kathryn (Howard) Lindecker of Fort Collins, Colorado. He was preceded in death by his parents, two brothers: Richard and Gerald; and one sister, Vesper Quick. He served in the United States Air Force for 10 years. He then began working for Knox County Oil, Knoxville FS, Spoon River FS, then retiring from Growmark after 32 years. He started his career as a Feed salesman then went on to become a Petroleum salesman. He won several top salesman awards and prided himself on taking care of his customers. He was an active member of the First United Methodist Church in Knoxville, Illinois; Trustee for the Knoxville Community Fire Protection District for many years; 50-year member and Past Master of the Masonic Pacific Lodge 66 A.F. & A.M. of Knoxville, Illinois; Member of the Harry Philblad American Legion Post #749 of Knoxville, Illinois; and served as Alderman for the Knoxville City Council. He was an avid St. Louis Cardinal fan. He coached Little League when his sons played. He never missed a game or an activity if his kids were involved, he was their biggest fan. He loved his grandchildren and was blessed to be able to meet his first great granddaughter. He enjoyed gardening and lawnmowing, even taking the course to become a Master Gardener. He could usually be found in the yard or in the garden. He loved fishing and enjoyed taking fishing trips to Canada. He enjoyed hunting with family at the farm, including mushroom hunting. He loved to laugh and enjoyed joking with and teasing family, friends, and the occasional stranger. (Although, he did not really know a stranger.) He loved practical jokes and many of us will forever be grateful for the laughter he brought to our lives. He knew God and now holds his hand. Visitation will be held from 3:00 to 6:00 P.M. on Sunday, October 1, 2017 with Masonic Services to be held at 6:00 P.M. at the Hurd-Hendricks Funeral Homes and Crematory in Knoxville, Illinois Funeral Services will be held at 11:00 A.M. on Monday, October 2, 2017 at the Knoxville United Methodist Church in Knoxville, Illinois, with Rev. John Knueppel, officiating. Interment will be at the Knoxville Cemetery with Military Rites conducted by the VFW#2257/Legion #258 Veterans Honor Guard. Memorial Contributions may be made to the Knoxville United Methodist Church Memorial Fund or the Knoxville Community Fire Protection District. To send flowers or a memorial gift to the family of William R. "Bill" Shenaut please visit our Sympathy Store.
To send flowers to the family in memory of William R. "Bill" Shenaut, please visit our flower store.