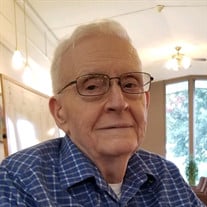 William R. “Bill” Poyner, age 87, of Knoxville, Illinois, passed away on Thursday, October 17, 2019 at the Knox County Nursing Home in Knoxville. Bill was born on October 8, 1932 in Corning, Arkansas, the son of Earl and Claire (Howerton) Poyner. After his father passed away, his mother remarried and Bill was raised by his mother and step-father, Luther Walker. On June 14, 1955, Bill was married to Vada Marie Myers. She preceded him in death on November 6, 2006. Bill enlisted in the United States Air Force and proudly served as a medic in Korea from 1951 to 1952. He lived most of his life in the Abingdon and Knoxville, Illinois areas. He worked as a carpet installer and ran Bill Poyner’s Carpet Service, teaching the trade to many, until his retirement. Bill was a founding member of the Jesus Name Pentecostal Church in Galesburg, Illinois. Bill is survived by his son, Ronald (and Kelly) Poyner of Galesburg; one brother, Euel (and Barb) Walker of Galesburg; one sister, Verneal Walker Singleton of Galesburg; three granddaughters; one grandson; four great-granddaughters; and great-great-grandchildren. He was preceded in death by his wife, Rev. Vada M. Poyner; one older brother, Gerald O. Poyner; his son, Charles R. Poyner; and a granddaughter. Visitation will be held on Monday, October 21, 2019 from 10:00 A.M. to 11:00 A.M. at the Hurd-Hendricks Funeral Home & Crematory in Knoxville. The funeral service will directly follow at 11:00 A.M., Rev. Troy Celestine officiating. Interment will be at the Oak Lawn Memorial Gardens in Galesburg, with Military Rites conducted by the VFW/American Legion/AMVETS Honor Guard, Galesburg. A fellowship will be held after the graveside services at 521 North Soangetaha Drive, Galesburg. Memorial contributions may be made to the Friends of the Knox County Nursing Home – Activities. To send flowers or a memorial gift to the family of William R. "Bill" Poyner please visit our Sympathy Store.
To send flowers to the family in memory of William R. "Bill" Poyner, please visit our flower store.