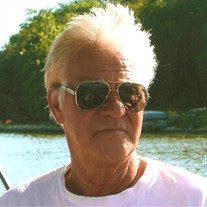 William E. “Hobie” Gilman, age 75, of East Galesburg, Illinois died at 4:18 A.M. on Friday, October 21, 2016 at his home. He was born on November 23, 1940 in Ottumwa, Iowa the son of William A. and Bertha O. Hart Gilman. He attended and graduated from Ottumwa High School. He married Mary J. Merchant on October 16, 1962 in Ottumwa, Iowa. She preceded him in death on January 9, 1997. He later married Diane G. Montgomery on Sept. 19, 1998 in East Galesburg, Illinois. Surviving is his wife: Diane Gilman of East Galesburg, Illinois; one son, Barry (Amy) Gilman of Platte City, Missouri; two daughters: Becky Gilman of Madison, Wisconsin, and Shannon Thompson of Kansas City, Missouri; two step-sons: Aaron (Anne) Hudson of Martinsville, Indiana and Joshua Hudson of Illinois; six grandchildren: Bryce, Brayden, Ella, Shane, Hayley, and Jake; five step-grandchildren; one sister, Becky Hartley of Marengo, Iowa; one niece, Melissa; and a daughter-in-law: Jackie Friemel of Bettendorf, Iowa. He was preceded in death by his parents, and one brother-in-law, Richard. He began working for the CB&Q Railroad in 1962, then the Burlington Northern Santa Fe Railroad, he retired after 39 years of service as an engineer in 2001. He was a member of the Bethel Baptist Church in Galesburg, Illinois and the Brotherhood of Locomotive Engineers Union. He enjoyed golfing and socializing with friends and family. Visitation will be held on Sunday, October 23, 2016 from 2:00 P.M. to 4:00 P.M. at the Hurd-Hendricks Funeral Homes & Crematory in Knoxville, Illinois. Funeral Services will be held at 11:00 A.M. on Monday October 24, 2016 at the Hurd-Hendricks Funeral Homes & Crematory in Knoxville, Illinois, with Rev. Phyllis Sterr officiating. Interment will be in the Knoxville Cemetery, Knoxville, Illinois. Memorials may be made to St. Jude’s Children’s Hospital or the Charity of the Donor’s Choice. Donations can also be given at the funeral service. Online condolences can be made at www.hurd-hendricksfuneralhome.com To send flowers or a memorial gift to the family of William E. Gilman please visit our Sympathy Store.
To send flowers to the family in memory of William E. Gilman, please visit our flower store.