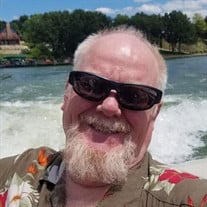 William A. “Tony” Garoutte, age 65 of Gilson, Illinois died at 7:16 A.M. on Friday, May 6, 2022, at OSF St. Francis Medical Center in Peoria, Illinois. He was born on April 5, 1957, in Galesburg, Illinois the son of John O. and Helen (Pullen) Malone Garoutte. He attended and graduated from Knoxville High School, the class of 1975. He married Susan E. Palmer on September 12, 1981, at Grace Lutheran Church in Knoxville, Illinois. Surviving is his wife, Susan Garoutte of Gilson, Illinois; two sons: William “Cody” (Jennifer) Garoutte of Fort Stewart, Georgia and John H. Garoutte of Panama City, Florida; five grandchildren: Aadriannah, Braedyn, Tristan, Harrison, and Colton; three sisters, Jeanne Flowers of Knoxville, Illinois, Kay (Tom) Walter of Knoxville, Illinois, Jo Ann Walker of Fort Worth, Texas; one brother, David (Brenda) Malone of Knoxville, Illinois; one aunt, Mary Cecil of Galesburg, Illinois; one brother-in-law, Dan Stogdill of Knoxville and many nieces and nephews. He was preceded in death by his parents and one sister, Joyce Stogdill. Tony began working at Bergner’s while it was being constructed, and then as receiving/building maintenance supervisor for 13 years. He met his wife, Susan at Bergner’s. Later, he worked as building maintenance supervisor for First Midwest Bank, managing 13 facilities in the Galesburg, Knoxville, and Quad-Cities area for 10 years and then for U.S. Equities Asset Management, Chicago, Illinois for 12 years. He later worked for Galesburg Electric/Galesburg Guns and Gear in Galesburg, Illinois until he retired. He owned and operated Red River Firearms Training. He was both NRA Certified Pistol Instructor and Range Safety Officer as well as Illinois Carry Concealed Instructor. He was a member of the National Rifle Association. He was a member of the East Galesburg Community Church. Thirty-year member of the Knoxville Community Fire Protection District, Gilson Fire Department, serving as chief for three years, until he retired. He was certified Firefighter II. He received his certified Fire Instructor 1 from Illinois Central College. He was an EMT/B for the former RMG Ambulance Service. He was very dedicated to the fire and ambulance service, serving as a mentor to many younger fire personnel. He loved being a Living History Reenactor of the Civil War, Old West, the 1930’s and 1940’s. Tony had his own YouTube channel “My Old Giltucky Home” and he was the chicken whisperer with his chickens. Visitation will be held from 4:00 to 7:00 P.M. on Thursday, May 12, 2022, at the Hurd-Hendricks Funeral Homes & Crematory in Knoxville, Illinois. Funeral Services will be held on Friday, May 13, 2022, at 10:30 A.M. at the funeral home, with Rev. Danny England officiating. Burial will be in the Gilson Cemetery, Gilson, Illinois. In-lieu of flowers, memorials may be made to the Family. A potluck will be held following the funeral services at the Knoxville Fire Department in Knoxville. On-line condolences and/or expressions of sympathy may be sent through www.hurd-hendricksfuneralhome.com To send flowers or a memorial gift to the family of William A. "Tony" Garoutte please visit our Sympathy Store.
To send flowers to the family in memory of William A. "Tony" Garoutte, please visit our flower store.