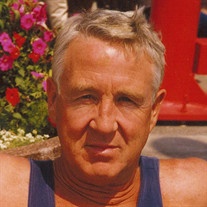 William “Bill” Garrett Bennett of La Crosse, Wisconsin passed away at his home with his wife and sister-in-law, Judy, at his side on November 11, 2017. He was born in Oneida, Illinois on February 2nd, 1943 to Walter Limley and Naoma Marie (Sharrah) Bennett. He is survived by his wife, Susan; sons, Brad (Rachael), Greg; daughter, Jennifer; sisters, Peggy (Mike) Kraynak, Joan Peterson, Harriett (Carl) Ewing and Eva Bainbridge; brothers, Norman and Larry; grandchildren, Olivia (Joe) Grieving, Tabitha (Jesse) Smith, Samuel Bennett, Nathan Bennett, Nicholas Simpson, Vivienne Bennett, and Vincent Bennett. He was preceded in death by his parents; brothers, Rex, Walter, Jr., and Robert; sister, Patty; and brother-in-law, Charles Peterson. Bill graduated from ROVA High School in 1961/1962 and attended Carl Sandburg College. He proudly served his country as an 82nd Airborne Paratrooper from 1962 to 1965. He worked various jobs before making a career with the Burlington Northern Santa Fe Railroad as a conductor. He retired with 30 years of service in 2004. Bill married Susan on November 15, 1990. They had no children but enjoyed spending time with friends and their children. They spent many relaxing days fishing and traveling together. Bill had a young spirit. Many enjoyed his company and loved listening to his adventurous life stories. He loved singing, listening to music, laughing, and making others laugh. He was a social person and no one was a stranger around him for long. He enjoyed doing many outdoor activities, spending peaceful river moments in the sun on his deck. He loved playing cards, watching and playing baseball, and was a diehard CUB fan He loved fishing, hunting, golfing, boating and riding his bike. You could also catch him playing poker at the casino. Bill loved life and lived life to the fullest. He will be deeply missed by his wife and soul mate, Susan, family, friends and all who knew him. Visitation will be held from 6:00 to 8:00 P.M. on Thursday, November 16, 2017 at the Hurd-Hendricks Funeral Homes & Crematory in Oneida, Illinois. Funeral Services will be held at 11:00 A.M. on Friday, November 17, 2017 at the Hurd-Hendricks Funeral Homes & Crematory in Oneida, Illinois, Rev. Scott Cramer officiating. Interment will be at the Oneida Cemetery in Oneida, Illinois with Military Rites conducted by the Rylander-Milroy American Legion Post #727. Memorial contributions may be made to the Family or Charity of the Donor’s Choice. A Memorial Service will be held in La Crosse, Wisconsin at a later date. To send flowers or a memorial gift to the family of William "Bill" Garrett Bennett please visit our Sympathy Store.
To send flowers to the family in memory of William "Bill" Garrett Bennett, please visit our flower store.