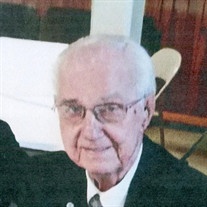 William H. Atwater Sr., 90, of Galesburg died at 5:47 P.M. on Thursday, May 25, 2017 at OSF St. Mary`s Medical Center in Galesburg, Illinois. William was born on February 17, 1927 in Kahoka, Missouri, the son of Henry and Jessie (Couch) Atwater. He married Leona M. Ebbing on July 26, 1947 in Haw Creek Township in Knox County, Illinois. He later married Doris M. Arnold on October 29, 1994 at the Memphis United Methodist Church in Missouri. She preceded him in death on March 21, 2015. William worked as a Forman for the former Gale Products for 30 years. He was a 50 year member of the Order of the Easter Star #880, and a 50 year member of the Knoxville Masonic Pacific Lodge #66 AF & AM and a member of the Harry Philblad American Legion Post #749 of Knoxville, Illinois. He served in the United States Army as a Dispatcher Driver from May 7, 1945 to August 23, 1946. He received the Victory Medal, the Asiatic Pacific Theater Ribbon and the Army of Occupational Medal – Japan. He is survived by his children, Gerald L. Atwater of East Galesburg, Illinois, Gregory A. (Ann) Atwater of Galesburg, Illinois and Nancy Walter of Bullhead City, Arizona; eight grandchildren, and sixteen great-grandchildren and one brother, Hubert E. (Sharon) Atwater of Cheyenne, Wyoming. He was preceded in death by his parents, his wife, Doris Atwater, one son, William H. Atwater II and three sisters, Twyla, Ila and Wilma. Funeral services will be held on Wednesday, May 31, 2017 at 11:00 A.M. at the Hurd-Hendricks Funeral Home in Knoxville, Illinois with Rev. Don Williams officiating. Military Rites will be conducted by the VFW #2257/Legion #285 American Legion Honor Guard. Visitation will be held on Tuesday, May 30, 2017 from 5:00 P.M. – 7:00 P.M. with Masonic services beginning at 7:00 P.M. Burial will be at the Knoxville Cemetery in Knoxville, Illinois. Memorials may be made to the Knoxville Masonic Lodge #66 AF & AM. Online condolences can be made at www.hurd-hendricksfuneralhome.com. To send flowers or a memorial gift to the family of William H. "Bill" Atwater Sr. please visit our Sympathy Store.
To send flowers to the family in memory of William H. "Bill" Atwater Sr., please visit our flower store.