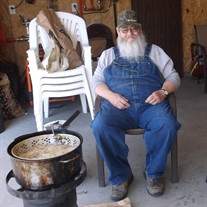 Wilbur D. Gooding, age 68, of Maquon, Illinois, died at 7:34 A.M. on Friday, February 15, 2019 at Seminary Manor in Galesburg, Illinois. He was born on October 29, 1950 in Canton, the son of Lee and Marie (Bliss) Gooding. He attended and graduated from Spoon River Valley High School. On November 26, 1983, Wilbur was married to Carla Gresch in Mercer County, Illinois. Wilbur is survived by his wife of thirty-five years, Carla Gooding of Maquon; children: Eric (and Danelle) Gooding of Henry, Illinois, Ashley (and Robert) Little of Maquon, and daughter by choice, Amanda Oglesby of Maquon; five grandchildren: Hunter, Ethan, Christian, Mikey, Mikalee; four siblings: Stanley Gooding of Dahinda, Illinois, Gary Gooding of Peoria, Illinois, Roger (and Barb) Gooding of East Galesburg, Donna Boyer of Springfield, Illinois; and many nieces and nephews. He was preceded in death by his parents; and one grandchild, Alyssa. Wilbur worked for Butler Manufacturing in the Shipping and Receiving Department, retiring after thirty-seven years. He served as a member of the Maquon Fire Department for thirty-three years, many of which he served as Assistant Chief. He was a passionate supporter and member of the NRA, and was also a member of the Roy Miller American Legion Post #644 in Fairview, Illinois. He enjoyed spending time in the great outdoors, especially hunting and fishing. Visitation will be held on Monday, February 18, 2019 from 4:00 P.M. to 7:00 P.M. at the Hurd-Hendricks Funeral Home & Crematory in Knoxville, Illinois. The funeral service will be held on Tuesday, February 19, 2019 at 10:00 A.M. at the Hurd-Hendricks Funeral Home & Crematory in Knoxville. Rev. Krey Leesman will be officiating the services. Military rites will be conducted by the Roy Miller American Legion Post #644 of Fairview and the Macomb National Guard. Interment will be at the Maquon Cemetery in Maquon. A fellowship gathering will follow the interment at the Maquon United Methodist Church in Maquon. Memorial donations may be made to the family or to the Maquon Fire Department. To send flowers or a memorial gift to the family of Wilbur D. Gooding please visit our Sympathy Store.
To send flowers to the family in memory of Wilbur D. Gooding, please visit our flower store.