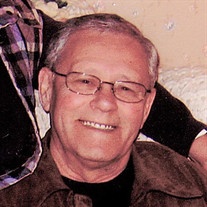 Waldo “John” Ray, Jr., age 78, of Maquon, Illinois, died at 2:20 P.M. on Monday, September 24, 2018 at Seminary Manor in Galesburg, Illinois. He was born on December 1, 1939 in Canton, Illinois, the son of Waldo A. and Mildred (VanHoose) Ray, Sr. He attended and graduated from Spoon River High School. He married Paula Johann on October 8, 1987 in Fairview, Illinois. Surviving his is wife, Paula Ray of Maquon, Illinois; two daughters: JoAnn Ray of Peoria, Illinois and Susan Ray of Littleton, Colorado; one step-son: Chad Morse of Maquon; a special friend whom he thought of as a daughter, Cathy Colvin of Littleton, Colorado; one sister, Alice (Dennis) Parker of Maquon; and one brother, Donald (Mary Jo) Ray of Maquon. He was preceded in death by his parents; infant son, Richard Allen; one step-son, Kyle Morse; and one sister, Bertha (Alvin) Thomas. He was employed by Admirals from 1959 to 1969, then Caterpiller from 1969 to 1983, then he owned and operated John’s Market in Fairview, Illinois from 1983 to 1993, then owned and operated Ray’s Country Fun in Biggsville, Illinois from 1993 to 2008, when he retired. John was an avid bowler all of his life until retirement. He received many awards throughout his life, but the highlight of his bowling career came on June 19, 1990 when he bowled a perfect 300 game. John loved to play cards and Farkel. He was a “die hard” CUBS fan all of this life. He was so proud and happy in 2016 when his beloved CUBS won the World Series. Visitation will be held on Sunday, September 30, 2018 from 2:00 P.M. to 4:00 P.M. at the Maquon United Methodist Church in Maquon, Illinois. Funeral Services will immediately follow at 4:00 P.M. Revs. Krey Leesman and Dan Doty will officiate. In honor of John please wear CUBS attire for the services. Memorial contributions may be made to the Guardian Angels, Maquon Fire Department, or to the Maquon United Methodist Church. To send flowers or a memorial gift to the family of Waldo "John" Ray Jr. please visit our Sympathy Store.
To send flowers to the family in memory of Waldo "John" Ray Jr., please visit our flower store.