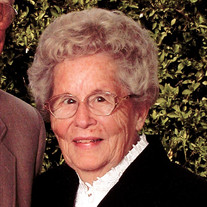 Virginia Whittaker, age 91, of Galesburg, died at 8:15 P.M. on Saturday, September 8, 2018 in Hudson, Illinois at her son’s home, surrounded by her family. Virginia was born on April 27, 1927 in Galesburg, the daughter of Glenn and Ina (Asbury) Cheesman. She married Kenneth “Kenny” Dale Whittaker on May 6, 1945 in Knoxville, Illinois. He preceded her in death on October 28, 2013. Virginia is survived by her son, Reginald (Karen) Whittaker of Hudson; three granddaughters: Lora (Mark) Embry of Normal, Illinois, Cathy (Mark) Hanes of Hudson, and Carrie (Rodney) Milligan of Frisco, Texas; six great-grandchildren: Brandon, Kailey, Jaxon, Evan, Garrett and Kendra; brothers and sister: John “Jack” Cheesman of Galesburg, Anna Mae (“Junior”) Dudley of Williamsfield, Illinois, and Edward Cheesman; and a brother-in-law, Don Mackie of Williamsfield, Illinois. She was preceded in death by her parents; one sister, Helen Mackie; and two sisters-in-law: Patti and Mary. She worked for the Knox County Supervisor of Assessment Office in Galesburg, retiring after 30 years. She enjoyed golfing, collecting Hummels and teddy bears, and antiquing. She was a member of the Knoxville First United Methodist Church. She and Kenneth enjoyed traveling and spending the winters in Arizona with Kenneth’s family. Visitation will be held on Wednesday, September 12, 2018 from 1:00 P.M. to 2:00 P.M. at the Hurd-Hendricks Funeral Home & Crematory in Knoxville, Illinois. Graveside services will directly follow the visitation at 2:30 P.M. at the Knoxville Cemetery, Pastor John Knueppel officiating. Memorial contributions may be made to the Knoxville United Methodist Church or a Charity of the Donor’s Choice. To send flowers or a memorial gift to the family of Virginia Whittaker please visit our Sympathy Store.
To send flowers to the family in memory of Virginia Whittaker, please visit our flower store.