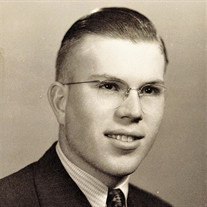 Vern T. Meeker, age 91, of Galesburg, Illinois, died at 10:55 P.M. on Monday, November 5, 2018 at the Rosewood Care Center in Galesburg. He was born on July 26, 1927 in Alexis, Illinois, the son of Guy T. and Mayme Vivian (Sedgwick) Meeker. He was part owner of the Implement Dealership in North Henderson, Illinois and worked as the mechanic there. He then worked for the former Maytag in Galesburg until 1995. He also farmed in North Henderson; his main hobby throughout his life was his love of farming. From 1951 to 1953 he served in the United States Armed Forces, afterwards transferring to the Army Reserve, where he served from 1953 to 1956. On August 21, 1954, he was married to Mary K. Nichols in Galesburg. Vern is survived by his wife, Mary K. Meeker of Galesburg; one daughter, Nancy J. Meeker of Eureka, Illinois; four grandchildren: Richard J. (Kelley) Robison of Washington, Illinois, Kassandra Robison-Woodworth of Galesburg, Kathryn E. (Brett) Kettler of Aledo, Illinois, Timothy (Emily) Robison of Knoxville, Illinois; six great-granddaughters: Danica, Katie, Kennedy, Camille, Vivienne, and Izabella, with two grandchildren on the way; and one brother, Wendell G. Meeker of North Henderson, Illinois. He was preceded in death by his parents; one daughter, Kathryn; one great grandchild, Bryley; and two sisters: June and Ethlyn. A Celebration of Life will be held from 2:00 P.M. to 4:00 P.M. on Tuesday, November 13, 2018 at the Hurd-Hendricks Funeral Home & Crematory in Knoxville, Illinois. A Eulogy Service will directly follow at 4:00 P.M., with Military Rites conducted at 4:30 P.M. by the VFW/ American Legion/ AMVETS Honor Guard. A Fellowship gathering will be held following the services at 5:00 P.M. at the Hurd-Hendricks Fellowship Center in Knoxville. Memorial contributions may be made to the family. To send flowers or a memorial gift to the family of Vern T. Meeker please visit our Sympathy Store.
To send flowers to the family in memory of Vern T. Meeker, please visit our flower store.