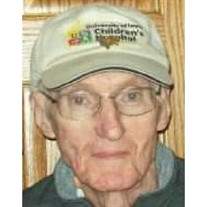 Thomas P. Campbell “Mr. Tom”, 90, of Henderson, Illinois died at 10:40 A.M. on Monday, January 23, 2017 at O.S.F. St. Mary’s Medical Center, Galesburg, Illinois. Thomas was born February 6, 1926 in Bronx, New York, the son of Thomas and Mary (McGuire) Campbell. He married Rebecca D. Dennis on December 17, 1949 in Vallejo, California. She preceded him in death on July 12, 2011. Thomas served in both World War II and the Korean War. He retired from the U.S. Navy in 1963 and then went on to work at Admiral Corporation in Bloomington in retiring 1990. Thomas is survived by one son, John Campbell of Henderson, Illinois; numerous nieces and nephews; and one special niece and nephew, Lisa and Mike Alderson of Henderson, Illinois. He was preceded in death by his parents, wife, three brothers, and one sister. Graveside memorial service will be held at 12:00P.M. on Saturday, February 4, 2017 at the Henderson Cemetery, Henderson, Illinois. Memorials may be made to the John Patrick Campbell Special Needs Trust c/o Midwest Bank of Western Illinois. Hurd-Hendricks Funeral Homes and Crematory are in charge of arrangements. On-line Condolences may be made through www.hurd-hendricksfuneralhomes.com To send flowers or a memorial gift to the family of Thomas P. Campbell please visit our Sympathy Store.
To send flowers to the family in memory of Thomas P. Campbell, please visit our flower store.