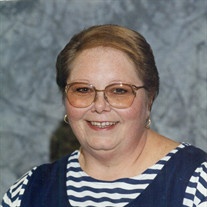 Susan Pearl “Susie” Postin, age 66, of Rural Maquon, Illinois died at 3:00 P.M. on Monday, February 1, 2016 at Care Center of Abingdon, Illinois. She was born on November 28, 1949 in Peoria, Illinois, the daughter of Leith “Woody” and Gertrude Lee Ward Wooddell. She married Larry “Doc” Postin on August 17, 1969 at the United Methodist Church in Maquon, Illinois. Surviving is her husband, Larry “Doc” Postin of rural Maquon, Illinois; her mother Gertrude Wooddell of rural Maquon, Illinois; two sons, Chris (Candy) Postin of Abingdon, Illinois and Mike (Heather) Postin of Cuba, Illinois; and one daughter, Mindy Postin of Maquon, Illinois; seven grandchildren, Maisey, Noah, Jaron, Alex, Cassidi, Owen, and Cali; one sister, Diane (Keith) Durdle of rural Maquon, Illinois. She was preceded in death by her father. Susie worked for the Knox Country Nursing Home for nearly 30 years as a CNA and before her retirement in 2006, she worked in Social Services. Susie was an expert at loving on her children and grandchildren of whom she was so proud. Susie was a passionate animal lover and over the years had many beloved dogs and cats. At one time she was an avid bowler and a Cub Scout Den Mother. She enjoyed many hobbies throughout her life including ceramics, woodworking and needlepoint. She loved tending to her vegetable and flower gardens. Proficient at surfing the “net”, she loved connecting with friends on Facebook and Farmville. Susie enjoyed playing games like Yahtzee and was a ruthless card player specializing in Gin Rummy and King’s Corner. She was especially proud of her vast collection of wolf figurines and art. Funeral Services will be held at 3:00 P.M. on Sunday, February 7, 2016 at the Hurd-Hendricks Funeral Homes & Crematory in Knoxville, Illinois. Rev. Krey Leesman will officiate. Visitation will be held from 1:00 P.M. to 3:00 P.M. on Sunday, February 7, 2016 at the Hurd-Hendricks Funeral Homes & Crematory in Knoxville, Illinois. Interment will be at the Foster Cemetery, rural Fairview, Illinois. In-lieu of flowers, the family has asked that memorials be made to the Care Center of Abingdon Residents’ Activity Fund or to the Maquon Fire Protection and First Responder Service. To send flowers or a memorial gift to the family of Susan Pearl "Susie" Postin please visit our Sympathy Store.
To send flowers to the family in memory of Susan Pearl "Susie" Postin, please visit our flower store.