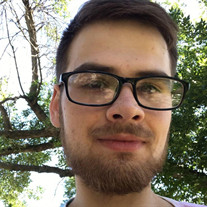 Stephan A. R. Childers, age 23, of Knoxville, Illinois, died at 3:52 P.M. on October 25, 2018, at the University of Kansas Medical Center in Kansas City, Kansas. He was born on March 4, 1995 in Flagstaff, Arizona, the son of Esteban A. Armijo and Jennifer M. Childers. He was reared and educated in the Knoxville area, graduating from Knoxville High School in 2013. He went on to attend Carl Sandburg College to obtain a degree in Business. Stephan is survived by his father, Esteban (and Selena) Armijo of Winslow, Arizona; his mother, Jennifer (and Anthony Kerns) Childers of Albuquerque, New Mexico; three brothers: Christopher Childers of Knoxville, Gabriel Armijo of Winslow, Arizona, Michael Armijo of Winslow, Arizona; his maternal grandfather, Joseph Childers of Winslow, Arizona; his nephew, Ayden Childers; his paternal grandmother, Theresa Armijo of Flagstaff, Arizona; his aunt, Patricia Schwartz of Buckeye, Arizona; five uncles: Joseph (and Amy) Childers of Chula Vista, California, Leo Armijo, Jr. of Winslow, Arizona, Frank Armijo of Winslow, Arizona, Marcus Armijo of Winslow, Arizona, Joseph Armijo of Flagstaff, Arizona; many great-aunts, great-uncles, cousins and friends; and his beloved dogs, Nyla and Marley. He was preceded in death by his maternal grandmother, Jo Ann Miller; and his paternal grandfather, Leo Armijo, Sr. He worked as a Black Jack Dealer at the Isle in Bettendorf, Iowa. Stephan will be remembered as an animal lover, especially having a soft spot for turtles and dogs. He loved spending time reading and watching the History channel. He was an avid fan of Game of Thrones. Cremation rites will be accorded. Visitation will be held from 5:00 P.M. to 8:00 P.M. on Friday, November 2, 2018 at the Hurd-Hendricks Funeral Home & Crematory in Knoxville. A Eulogy Service will be held following the visitation at 8:00 P.M. Inurnment will be at the Knoxville Cemetery in Knoxville at a later date. In-lieu of flowers, memorial contributions may be made to the family, or to a charity of the donor’s choice. To send flowers or a memorial gift to the family of Stephan A. R. Childers please visit our Sympathy Store.
To send flowers to the family in memory of Stephan A. R. Childers, please visit our flower store.