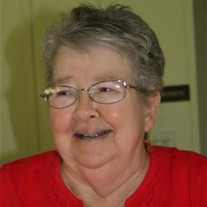 Shirley Grace Sundberg, 90, of Oak Run, died at 9:15 A.M. on Friday, January 08, 2016 at the Knox County Nursing Home, Knoxville, Illinois. Shirley was born on December 26, 1925 in Galesburg, Illinois, the daughter of Wilmer and Lillian (Robinson) Riggle. She was raised and educated in the Galesburg and Cameron area and she graduated from Knoxville High School. She married Howard William Sundberg on February 15, 1948 in Knoxville, Illinois and he survives. Shirley worked for Galesburg Special Education for 15 years and she was also a homemaker. During her life she was an active member at the First Christian Church in Galesburg and the First Christian Church in Knoxville. Shirley was a member of the National Association of Letter Carriers, during the 1960’s she served as the President of the state association. She also assisted with many local baseball programs. Shirley is survived by her husband, Howard of Oak Run; two sons, Jim (Janet) Sundberg of Arlington, Texas and Chuck (Frances) Sundberg of Broken Arrow, Oklahoma; one daughter, Linda (Bob) Beal of Pekin, Illinois; seven grandchildren; and ten great grandchildren. She was preceded in death by her parents and her sister and brother-in-law, Rosemary and Joe Johnson. Funeral Services will be held at 6:00 P.M. on Tuesday, January 12, 2015 at the First Christian Church in Knoxville, Illinois. Rev. David Shreeves will officiate. Visitation will be from 5:00 P.M. to 6:00 P.M. on Tuesday, January 12, 2015 at the First Christian Church in Knoxville, Illinois. Cremation rites will be accorded following the services. Memorials may be made to the donor’s choice. On-line condolences and sympathy cards may be sent through www.hurd-hendricksfuneralhome.com To send flowers or a memorial gift to the family of Shirley Grace Sundberg please visit our Sympathy Store.
To send flowers to the family in memory of Shirley Grace Sundberg, please visit our flower store.