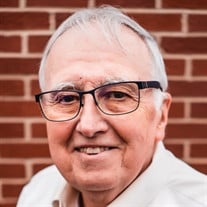 Sherrill L. Swanson, age 78, of Knoxville, Illinois died at 6:20 P.M. on Sunday, October 18, 2020, at Methodist Medical Center, Unity Point, Peoria, Illinois. Sherrill was born on October 14, 1942, in Galesburg, Illinois, the son of C. Alden and M. Joyce (Derham) Swanson. He attended and graduated from ROVA High School, class of 1961. He graduated from barber college in Peoria, IL in 1964. He married Louise M. Cox on September 28, 1963, at Corpus Christi Catholic Church, Galesburg, Illinois. Surviving is his wife, Louise Swanson of Knoxville, Illinois; his children: Kristle (George) Harms of Knoxville, Illinois, Doug Swanson of Oconomowoc, Wisconsin; Michelle (Jason) Johnson of Knoxville, Illinois; five grandchildren: Dustin (Samantha) Harms of Lake in the Hills, Illinois, Damir and Lily Swanson of Oconomowoc, Wisconsin, Nolan Harms of Knoxville, Illinois, Abbi Johnson of Knoxville, Illinois; two great-grandsons: Bradley and Isaac Harms; a brother, Mervyn (Becky) Swanson of Edwards, Illinois; nieces and nephews: Jodi Stevenson of Dunlap, Illinois, Cori (Joe) Thompson of Galesburg, Illinois, Mick (Beth) Swanson of Edwards, Illinois, Scott (Melissa) Swanson of Beason, Illinois; a brother & sister-in-law: Margaret (Jack) Derham of Knoxville, Illinois; and other relatives and many friends. He was preceded in death by his parents and one brother, Max. Sherrill owned and operated Swanson’s Barbershop in Galesburg, Illinois from 1964 to present. He was a realtor in the Knox County area since 1978. Sherrill loved his work. He was proud of the business he created and the service he provided. Although the location of the shop has changed a few times, Sherrill enjoyed his business partners and interaction with his faithful customers. Swanson’s Barber Shop was more than just a barbershop; it was where you could hear a good story, a funny joke, and teasing between the dedicated Cubs and Cardinals fans. As a proud member of his community, Sherrill supported several service organizations. He was a long-time member of the Illinois Police Association and an avid supporter of the American Cancer Society. To honor his wife’s dedication to the medical field, Sherrill established a nursing scholarship at Carl Sandburg College. Sherrill was happy to support community functions through donations and giving of his time. There was nothing more important to Sherrill than his family. He married his high school sweetheart and enjoyed 57 years of love and friendship. He was a dedicated father of three children to whom he imparted his wisdom, generosity, and his tremendous sense of humor. The pride Sherrill had for his grandchildren and great-grandchildren was unparalleled. Spending time with his family was a priority and he embraced his roles of father-in-law, brother, uncle, and cousin. A memorial service will be held at 2:00 p.m. on Saturday, October 24, 2020, at the Hurd-Hendricks Funeral Homes & Crematory in Knoxville, Illinois. Following the service, interment will be held at St. Joseph Cemetery in Galesburg, Illinois. A Celebration of Life will be held on Sunday, October 25, 2020, from 1:00 p.m. to 4:00 p.m. at the Harry Philblad American Legion Post in Knoxville, Illinois. To honor Sherrill’s great love of sports, especially the Chicago Cubs, wearing your favorite sports apparel to the celebration is welcomed. Memorials may be made to the Knox County Humane Society or the donor’s choice. Online condolences or expressions of sympathy may be made through www.hurd-hendricksfuneralhome.com. To send flowers or a memorial gift to the family of Sherrill L. Swanson please visit our Sympathy Store.
To send flowers to the family in memory of Sherrill L. Swanson, please visit our flower store.