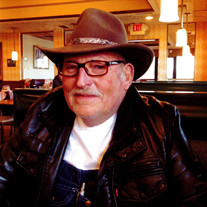 Ronald E. Grawey, 72, of Galesburg, Illinois, passed away Thursday, May 30, 2019 at his home after a courageous battle with cancer. Ron was born September 17, 1946 in Galesburg, the son of John J. and Mary C. (Roche) Grawey. He graduated from Costa High School in 1965 and later attended Carl Sandburg College and the University of Illinois. He married Debbie West on February 25, 1972 in Galesburg. She preceded him in death on December 16, 2006. He is survived by his 3 children, Melissa (Sandi) Johnson of Georgia, Jason Grawey of Georgia, Ross (Tina) Johnson of Moline; 2 sisters, Winnie Tuszynski and Janet (Richard) Vanfleet and 1 brother Jim Grawey all of Galesburg; 1 uncle, Jozef Tummers of Indianapolis, Indiana; 5 grandchildren; 6 great-grandchildren; and many nieces, nephews and cousins. Ron was lovingly cared for at home by his family throughout his illness. He enjoyed the Memorial Day weekend with all of his kids home, before he passed away with his daughter Missy at his side. He was preceded in death by his parents. He was a kind caring man who easily made friends and kept them forever. He left everyone he met with a smile. His Dad was his hero and he lived his life trying to emulate him. His dedication to his job was unsurpassed. Ron farmed for 40 plus years for Inness Farms and drove a semi for 8 years. He was a member of the Galesburg Elks Lodge #894 and the Midwest Oliver Tractor Association. He had a passion for his antique Oliver tractors he collected through the years. He enjoyed fishing and was an avid fan of the Chicago Cubs and the Iowa Hawkeyes. He was of Catholic faith. Cremation was accorded. A graveside memorial service will be held on Thursday, June 6, 2019 at 2:00 P.M. at East Linwood Cemetery in Galesburg. A fellowship will follow the services at the Elks in Galesburg. Memorial contributions may be left to the family. The Hurd-Hendricks Funeral Home and Crematory is assisting the family. To send flowers or a memorial gift to the family of Ronald E. Grawey please visit our Sympathy Store.
To send flowers to the family in memory of Ronald E. Grawey, please visit our flower store.