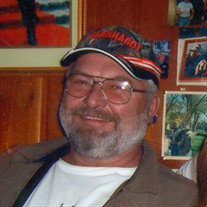 Roger L. Lytle, 61, of Wataga, Illinois died at 11:38 P.M. on Sunday, March 19, 2017 at his home. Roger was born on November 18, 1955, the son of Charles T. and Doris A. (Palmer) Lytle in Galesburg, Illinois. He married Debra Olson on October 5, 1974 in Wataga, Illinois. Debra preceded him in death on December 29, 2004. He worked as a roofer for thirty-six years, working for Whites and Dowers Roofing. Roger was active in the Community, Wataga Days, The Roofers Union, The Wataga Fire Department, Trustee of the Village Board and an Elks member from 2004- 2008. Roger enjoyed cooking, NASCAR, motorcycles, and having an active social life. Roger is survived by children, Lisa Muir of Galesburg, Illinois and Tom (Nichole) Lytle of Wataga, Illinois; Four grandchildren, Ashley, Zak, Chelsey and Brianna; one great-granddaughter, Grace; siblings, Mike (Paula) Lytle of Versailles, Missouri, Tim (Jan) Lytle of Galesburg, Illinois, Jeff Lytle of Galesburg, Illinois and Eddie (Deb Hilligoss) Lytle of Galesburg, Illinois. He was preceded in death by his parents and his wife. Cremation rites will be accorded. Family and friends potluck gathering will be held on Saturday, March 25, 2017 at 11:00 A.M. at the Wataga Fire Department in Wataga, Illinois. A Memorial Ride will be held on Saturday, May 20, 2017. Memorials may be made to OSF St. Mary`s Hospice. Hurd-Hendricks Funeral Homes and Crematory in Knoxville, Illinois are in charge of arrangements. On-line Condolences may be made through www.hurd-hendricksfuneralhomes.com To send flowers or a memorial gift to the family of Roger Lytle please visit our Sympathy Store.
To send flowers to the family in memory of Roger Lytle, please visit our flower store.