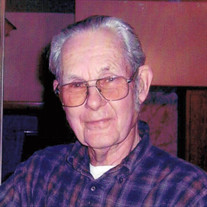 Rodney Everette Schultz, 93, East Galesburg, passed away at home with his wife at his side on Monday, February 15, 2021, 8:45 AM. Rodney was born on March 23, 1927 in Chippewa Falls, Wisconsin. He was the son of Robert P. and Josephine (Severson) Schmidt. He married Linda K. Guild on February 11, 1966 in Galesburg. Rodney is survived by his wife, Linda of East Galesburg; his children, Rodney Schultz, Jr of Burlington, IA, Patty (Will) Miner of Oquawka, James Schultz of Burlington, IA; sister, Kathleen Kelso of Galesburg; and five grandchildren. He was preceded in death by his parents; daughter, Kathy Hillier; stepson, John Reeder; one brother, Jerry Schultz; and one sister, Joan Schultz. Rodney attended Brown’s Business College. He was a veteran of the United States Army, serving in World War II. He worked at Gale Products for 20 years. Rodney was a member of the East Galesburg Community Chapel. He was an avid Green Bay Packers fan. Rodney was also a collector of watches, and enjoyed finding a bargain at a yard sale. Most of all, he loved his family and was happiest when he was able to help them. Graveside services will be 1 PM, Friday, February 19, 2021 at Oaklawn Memorial Gardens, 2040 US-150, Galesburg, IL 61401. Those who wish to participate in the funeral procession, should meet at 12 PM at Hurd-Hendricks Funeral Homes and Crematory, 120 South Public Square, Knoxville, IL 61448. Rev. Dan England will officiate. Military rites will be conducted at the graveside. Hurd-Hendricks Funeral Homes and Crematory, Knoxville have been entrusted with arrangements. Memorials may be donated to East Galesburg Community Chapel or GHAS. Online condolences may be left for the family at www.hurd-hendricksfuneralhome.com. To send flowers or a memorial gift to the family of Rodney Everette Schultz please visit our Sympathy Store.
To send flowers to the family in memory of Rodney Everette Schultz, please visit our flower store.