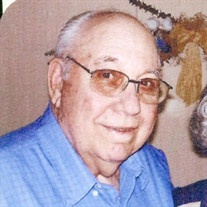 Robert “Bruce” Worrell, age 91, of Galesburg, Illinois died at 4:58 A.M. on Tuesday, March 15, 2016 at Galesburg Cottage Hospital in Galesburg, Illinois. He was born on July 11, 1924 in rural Fairview, Illinois, the son of Claude E. and Goldie C. Latimer Worrell. He attended and graduated from Yates City High School in 1941. He married Joanne M. Hedstrom on June 27, 1948 at the United Methodist Church in Oneida, Illinois. He is survived by his wife, Joanne of Galesburg, Illinois; three daughters: Tracey (David) Herbert of Payson, Arizona, Anita (Robert) Willett of League City, Texas, Martene “Marty” (Christopher) Wronkiewicz of Downers Grove, Illinois; four grandchildren: John (Katie) Willett, Alissa (Jason) Bloch, Stephanie Wronkiewicz and Michael Wronkiewicz; two great granddaughters, Edolie Willett and Lilly Bloch. He was preceded in death by his parents and one son, Allen Worrell. He was a member of the Victoria United Methodist Church of Victoria, Illinois, the Knox County Farm Bureau, and the Ralph M Noble American Legion Post #285 of Galesburg, Illinois. Bruce farmed his entire life in Knox County and was employed at Gates Rubber Company, Galesburg Illinois, for over thirty years. In retirement Bruce and Joanne enjoyed traveling the United States by Coachman RV. He loved being with his children and grandchildren. Bruce was a veteran of World War II, serving in the Army Air Corps as a flight instructor. Funeral services will be held at 11:00 A.M. on Tuesday, March 22, 2016 at the Victoria United Methodist Church in Victoria, Illinois. Rev. Russ Theobald officiating. Visitation will be held from 6:00 P.M. until 8:00 P.M. on Monday, March 21, 2016 at the Hurd-Hendricks Funeral Homes in Oneida, Illinois. Interment will be at the Oneida Cemetery, Oneida, Illinois. Memorial contributions may be made to the Victoria United Methodist Church. On-line condolences and sympathy cards may be sent through www.hurd-hendricksfuneralhomes.com To send flowers or a memorial gift to the family of Robert Bruce Worrell please visit our Sympathy Store.
To send flowers to the family in memory of Robert Bruce Worrell, please visit our flower store.