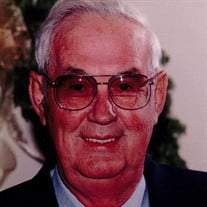 Robert Stickell, age 91 of Knoxville, Illinois died Friday, August 23, 2019 at Knox County Nursing Home, Knoxville, Illinois. He was born on April 7, 1928 in Galesburg, Illinois the son of Curtis and Marie Scott Stickell. He attended and graduated from Knoxville High School in the Class of 1946. He married the former Dorothy Stotts on December 5th 1948. Surviving is his wife Dorothy Stickell of Knoxville; son, Steven Stickell, Knoxville; grandsons, Jason (Kimberly) Stickell, Moline, Jeremy (Jessica) Stickell, Albia; 4 great grandchildren, Dusty (Emily) Wyldes, Jennifer, Josie and Janey Stickell; great great grandchildren, Bow, Alissa and Curtis. He was preceded in death by his parents; one brother, Harold Stickell and twin sister, Ramona Stickell. Robert had been employed by Intrastate Phone Company which then became Centel for 31 years until retirement. Previously he was employed at Illinois Power Company. He enjoyed farming and spending time with his family. He will be missed riding his John Deere Gator to keep watch on the farm and the wildlife. He was a member of First United Methodist Church of Knoxville, Illinois. Funeral Services will be held at 11:00 A.M. on Tuesday, August 27, 2019 at the Hurd-Hendricks Funeral Homes & Crematory in Knoxville, Illinois. Rev. David Mustain will officiate. Visitation will be held from 10:00 A.M. until 11:00 A.M. at the funeral home. Burial will be in Knoxville Cemetery, Knoxville, Illinois. Memorials may be made to the Knoxville United Methodist church. To send flowers or a memorial gift to the family of Robert Stickell please visit our Sympathy Store.
To send flowers to the family in memory of Robert Stickell, please visit our flower store.