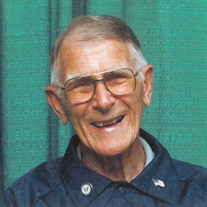 Robert “Bob” Wayne Rutledge, age 88, of Knoxville, Illinois died on Tuesday, January 2, 2018 at his home. Robert was born on May 26, 1929 in Galesburg, Illinois, the son of Charles L. “Roy” and Ellen (Moore) Rutledge. He was reared and educated in Galesburg, Illinois, graduating from Galesburg High School in 1947. He married Catherine Dudman on April 27, 1948 in Galesburg, Illinois. She preceded him in death on October 29, 2012. Surviving are three sons: David W. (Sandy) Rutledge of Galesburg, Illinois, James D. “Jim” (Judy) Rutledge of Knoxville, Illinois and D. Andrew “Andy” (Amy) Rutledge of Galesburg, Illinois. Also surviving are twelve grandchildren, twenty great-grandchildren and three great-great-grandchildren. He was preceded in death by his parents, three brothers, two sisters, and one son: Kirk. He worked for the United States Postal Service as a Letter Carrier. He served in the United State Navy from 1952 to 1953 on the aircraft carrier USS Kearsarge and USS Lake Champlain. He enjoyed bicycling. He was a loving father and grandfather, and was very well respected. Visitation will be held from 2:00 P.M. to 4:00 P.M. on Saturday, January 6, 2018 at the Hurd-Hendricks Funeral Home and Crematory in Knoxville, Illinois. There will be no Funeral Service. The Family requests NO FLOWERS; however, memorials may be made to: Seeing Eye Inc., 10 Washington Valley Road, Morristown, NJ 07960. They provide Seeing Eye dogs at no cost to individuals. On-line condolences or expressions of sympathy may be sent through www.hurd-hendricksfuneralhome.com To send flowers or a memorial gift to the family of Robert W. Rutledge please visit our Sympathy Store.
To send flowers to the family in memory of Robert W. Rutledge, please visit our flower store.