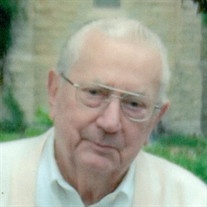 Robert “Pete” Guy Peterson, age 92, of Knoxville, Illinois died at 12:10 A.M. on Friday, April 8, 2016 at the Knox County Nursing Home. Robert was born on April 6, 1924 in Galesburg, Illinois the third son of Floyd Clifford and Vada Emma (McGrew) Peterson. He married Mary E. Holt on June 1, 1945 in Knoxville, Illinois. Robert was a lifelong resident of Knoxville, graduating from Knoxville High School in 1942, a varsity letter winner in football, basketball and track. He placed second in the state pole vault in 1942. He attended Carthage College for one year and was on the basketball team. Bob was an avid Knoxville Blue Bullet Fan and always loved the Green Bay Packers. Starting in 1944, he was employed by ROWE Mfg. Co. where he eventually became the asst. administrator of overhead doors. In 1972, he owned and operated the Custom Cabinet Shop in Knoxville. Bob was an extraordinary craftsman and furniture maker and enjoyed his trade until the very end. Always an excellent fisherman Bob loved his time with all his fishing buddies. He married Mary Ellen Holt on June 1, 1945, they enjoyed over 70 years together. Their children are Chris (and Bob) Bailey and Chuck (and Jean) Peterson. They have four grandchildren and ten great-grandchildren. Bob was a wonderful husband, father and grandfather. Bob was preceded in death by his parents and two brothers, Floyd “Pete” and Howard Peterson. He was a lifelong member of Grace Lutheran Church of Knoxville, Illinois. Visitation will be held on Sunday, April 10, 2016 from 4:00 P.M. to 6:00 P.M. at the Hurd-Hendricks Funeral Homes & Crematory in Knoxville, Illinois. The funeral service will be held on Monday, April 11, 2016 at 10:00 A.M. at the Hurd-Hendricks Funeral Homes & Crematory in Knoxville, Illinois, with Rev. Michel D. Clark will officiate. Interment will be in the Knoxville Cemetery, Knoxville, Illinois. Memorial contributions can be made to Grace Lutheran Church or to the family for a suitable memorial at Knoxville High School. Online condolences and sympathy cards may be left through www.hurd-hendricksfuneralhome.com To send flowers or a memorial gift to the family of Robert "Pete" G. Peterson please visit our Sympathy Store.
To send flowers to the family in memory of Robert "Pete" G. Peterson, please visit our flower store.