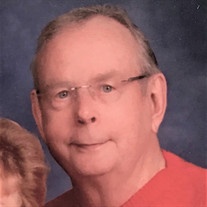 Dr. Robert O. Johnson, Jr., age 78, of Knoxville, Illinois, died at 4:45 A.M. on October 25, 2018 at the OSF Saint Mary Medical Center in Galesburg. He was born on March 10, 1940 at Cottage Hospital in Galesburg, the son of Robert O. and Veda Marie (Roseberg) Johnson, Sr. He was reared and educated in the Knoxville area, graduating from Galesburg High School in 1958. He attended college at William & Mary College, Southern Illinois University, and then Western Illinois University, obtaining degrees in Ministry, Education, and Psychology. On April 2, 1964, he married Pattie A. O’Field at the Grace Lutheran Church in Knoxville. She survives of Knoxville. Also surviving are their three sons: Raymond D. (and Linda) Johnson of Michigan, Gregory (Michelle) Johnson of Lake of the Hills, Illinois, William C. “Chilly Willy” (and Kirsten) Johnson of Galesburg, six grandchildren; five great-grandchildren; his brother, Victor O. Johnson of Aledo, Illinois; and his beloved pet, Harley, Jr. He was preceded in death by his parents. Robert started his teaching career at the Knoxville School District in 1970, and then taught at the former Westin Elementary School and Lincoln Middle School in Galesburg, returning to Knoxville where he was instrumental in the construction of the Knoxville Junior High and became the Junior High Principal from 1984 to 1987. He then became the Principal of Raymond R. Marquith Elementary School in 1988. He was Assistant Superintendent of Knox County Regional Office of Education from 1989 to 1991, then from 1991 to 2009 he was Regional Superintendent of Knox County Regional Office of Education. He served as President of the former IEIEA Illinois Superintendents Board of Education, and was a member of the Knox county Retired Teachers’ Association. From 1985 to 1993, he served as Ward 1 Alderman of Knoxville. He was elected mayor of Knoxville in 1993, serving in office until 1994. In 2011, he served as Ward 2 Alderman, and was again elected mayor of Knoxville, serving from 2011 until 2016. He was a member of the Grace Lutheran Church in Knoxville and served on its council, and was also a member of the Masonic Pacific Lodge #66 A.F. & A.M. and the Order of the Eastern Star Chapter #880. He was a founding member of the Men’s Prostate Club in Galesburg. He was a former member of the Knoxville Kiwanis, Knoxville Lions Clubs, a member of the Galesburg Lions Evening Club, and Vice President of CASA. Visitation will be held from 5:00 P.M. to 9:00 P.M. on Thursday, November 1, 2018 at the Hurd-Hendricks Funeral Home & Crematory in Knoxville, with Masonic Services at 8:30 P.M. Funeral Services will be held at 10:00 A.M. on Friday, November 2, 2018 at the Hurd-Hendricks Funeral Home & Crematory, Rev. Cliff Schmidt officiating. Interment will be at the East Linwood Cemetery in Galesburg. Memorial contributions may be made to Saint Jude Children’s Research Hospital or the Knoxville Community Fund. To send flowers or a memorial gift to the family of Dr. Robert O. Johnson Jr. please visit our Sympathy Store.
To send flowers to the family in memory of Dr. Robert O. Johnson Jr., please visit our flower store.