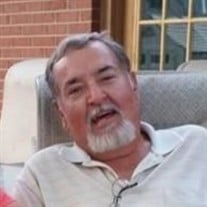 Robert G. “Bob” Dugan, 70, of Knoxville, died on Saturday, June 27, 2020, 9:50 pm, at OSF St. Mary Medical Center, Galesburg. Bob was born May 14, 1950 in Galesburg. He was the son of Harold R. and Shirley J. (Nash) Dugan. Bob married Colleen Kane on July 6, 1999 in Las Vegas, NV. Surviving Bob are his loving wife, Colleen; son Brent (Marnie) Dugan of Avon; step-sons, Greg (Diana) Ruetz of Knoxville and Shannon Ruetz of Galesburg; sister, Rebekah Dugan of Cameron Park, CA and six grandchildren, Tyler, Jake and Luke Dugan, Brayden and Ashtyn Ruetz and Makayla Huff. He was preceded in death by his parents. Bob attended Gilson and Knoxville schools. He was a member of the Knoxville High Class of 1968. Bob worked as a camera man for WMBD; and later Gates Rubber Company. He retired from Gates as a plant foreman in 1975-2007 after 32 years of service. Bob’s hobbies included hunting and fishing, golfing, working in his garden, and playing cards. He was an active member of the Sons of the American Legion. Bob coached baseball for the Knoxville Little League program and played softball for the legion and Knoxville Merchants. He had a love/hate relationship when it came time to watching the St. Louis Cardinals play. Bob was a man of very few words, but when spoken, those words were profound. Bob’s greatest joy was spending time with his family and watching his grandchildren’s various sporting events. He was their biggest fan. Bob’s generous spirit will live on through many; as he unselfishly became a donor for the Gift of Hope Network. Cremation rites have been accorded. A celebration of Bob’s life will be held on Sunday, July 5, 2020, from 1-4 pm at the Knoxville American Legion, Harry Phliblad Post #749, 749 Henderson Road, Knoxville, Illinois 61448. Hurd-Hendricks Funeral Home has been entrusted with arrangements. Memorials may be donated to the family to be given to various organizations in the Atown and Knoxville communities. Online condolences may be left to the family at www.hurdhendricks.com. Due to COVID-19 restrictions, face masks and social distancing will be required. To send flowers or a memorial gift to the family of Robert G. "Bob" Dugan please visit our Sympathy Store.
To send flowers to the family in memory of Robert G. "Bob" Dugan, please visit our flower store.