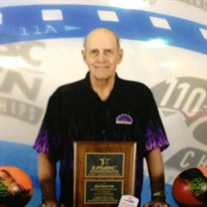 Robert “Bob” E. Dorethy, age 80, of Knoxville, Illinois died at 7:30 P.M. on Thursday, April 26, 2018 at Heartland Health Care Center in Galesburg, Illinois. Bob was born on August 19, 1937 in Macomb, Illinois the son of Ernest and Darlene (Carroll) Dorethy. He attended and graduated from Galesburg High School, the class of 1955. He married Patricia Renken on February 17, 1968 in Washburn, Illinois. She survives of Knoxville, Illinois. Also surviving are four children: James (Charlotte) Dorethy of Edwardsville, Illinois, Tony (Denise) Dorethy of Abingdon, Illinois, Dana (Katrina) Dorethy of Laura, Illinois and Nick (Ashley) Dorethy of Manito, Illinois; seven grandchildren; and a sibling, Roger Dorethy of Galesburg, Illinois. He worked as a millwright for Admiral and Maytag for 42 years. He was an avid bowler for 60 years. He was inducted into the Galesburg Bowling Hall of Fame in 1986, the Illinois hall of Fame in 2008; he held the highest series score bowled in Galesburg for over 25 years. bowled ten 300 games and five 800 series. he competed in the national tournament for 40 years. He was a member of the Galesburg Boots & Saddle Club. He trails rode and showed for 50 years. He also served in the United States Army from October 31, 1960 to September 19, 1962. A Celebration of Life will be held from 4:00 PM to 7:00 PM on Saturday, May 5, 2018 at the Alley Oops, 409 South Western Avenue, Abingdon, Illinois with Military Rites will be conducted by the Abingdon American Legion Post, Abingdon, Illinois at 5:00 P.M.. Memorials may be made to the Family. Hurd-Hendricks Funeral Homes & Crematory in Knoxville, Illinois is assisting with arrangements. To send flowers or a memorial gift to the family of Robert "Bob" E. Dorethy please visit our Sympathy Store.
To send flowers to the family in memory of Robert "Bob" E. Dorethy, please visit our flower store.