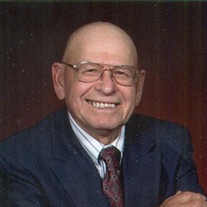 Robert D. Anderson, 88, of Galesburg, Illinois passed away Monday, April 4, 2016 at the Quincy Illinois Veterans Home. Robert was born on December 19, 1927 in Center Prairie Township in rural Knox County, Illinois, the son of Carl A. and Mary (Stevenson) Anderson. He married Dorothy V. Elliott on January 3, 1960 in Galesburg, Illinois. He proudly served his country as a soldier for the United States Army during the Korean Conflict. Robert was a truck driver for Galesburg Glass for 35 years. He was a member of Trinity Lutheran Church in Galesburg. He is survived by his 2 children; Karen S. (and Jim) Chewing of Canton, Illinois, Cindy A. (and Karl) Becker of Phoenix, Arizona, 1 grandson; Bradley A. (and Alisha) Custard of Canton, Illinois. He was preceded in death by his wife; Dorothy Anderson, parents; Carl and Mary Anderson, and his brother; Charles Anderson. Visitation will be held on Friday, April 8, 2016 from 12:00 P.M. to 1:00 P.M. at the Hurd-Hendricks Funeral Home in Knoxville, Illinois. The funeral service will on Friday, April 8, 2016 at 1:00 P.M. at the Hurd-Hendricks Funeral Home in Knoxville. Interment will be in the Knoxville Cemetery. Memorial contributions can be made to the Illinois Veterans Home in Quincy, Illinois, the Alzheimer’s Association, or to the donor’s choice. Online condolences may be left at ww.hurd-hendricksfuneralhome.com To send flowers or a memorial gift to the family of Robert D. Anderson please visit our Sympathy Store.
To send flowers to the family in memory of Robert D. Anderson, please visit our flower store.