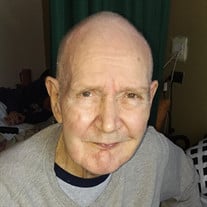 Richard E. Banks, age 83, of Galesburg, Illinois, died at 10:21 A.M. on Tuesday, June 4, 2019 at the Marigold Rehabilitation and Healthcare Center in Galesburg. He was born on July 16, 1935 in the former Village of Randall (now East Galesburg), the son of Chester E. and Maude (Loman) Banks. On January 8, 1955, Richard was married to Florence Heselden in Monmouth. She preceded him in death. Richard is survived by six children: Marsha (and Tim) Pedigo, Rick (and Kelly) Banks, Ginny (and Don) Kerr, Brad (and Querina) Banks, Jeanie Banks, Jerry Banks; eleven grandchildren; nineteen great-grandchildren; and one sister, Myrtle Potter. He was preceded in death by his parents; wife; and a daughter, Candice Banks. Richard was a gentle soul and quick-witted, and enjoyed visiting with people over coffee, often at the Galesburg E. Main St. or Knoxville McDonalds. Richard worked a variety of jobs in his career, including the sawmill and Purington Brickyard in East Galesburg. He also drove semi-trucks for Rogers Bros. and other companies, both locally and on East coast runs, and he loved to talk about his truck driving days. He served as a police officer and as a volunteer firefighter for East Galesburg. Richard enjoyed fixing lawnmowers and growing pumpkins, and was a talented artist with a knack for drawing. Perhaps most of all, Richard was known for being a king storyteller with a vivid imagination. His larger-than-life stories always contained confirmable fact, but the details, whether or not true, never failed to entertain. He created alter egos such as Western hero Johnny Wagonbox, and the Civil War battlefield surgeon Johnny Reb, whose skill and technique rivaled modern medicine. In his latter days, Richard made many friends at the Marigold Nursing Home, and was able to take a "last ride" with the East Galesburg Fire Department and Knox County Sheriff's Department. Richard also loved to tell stories of his days of being a police officer and firefighter. Cremation rites will be accorded. A graveside memorial service will be held at 10:00 A.M. on Friday, June 7, 2019 at the Knoxville Cemetery in Knoxville, Illinois. Memorial contributions may be made to the East Galesburg Fire Department. Hurd-Hendricks Funeral Homes & Crematory is in charge of arrangements. To send flowers or a memorial gift to the family of Richard E. Banks please visit our Sympathy Store.
To send flowers to the family in memory of Richard E. Banks, please visit our flower store.