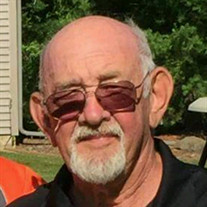 Raymond C. Brodrick, age 77, of Knoxville, Illinois died 8:33 P.M. on Sunday, February 26, 2017 at OSF St. Francis Medical Center, Peoria, Illinois surrounded by his family and friends. Raymond was born on January 5, 1940 in Galesburg, Illinois the son of Ralph and Cleo Whitcomb Brodrick. He attended and graduated from Galesburg High School in 1957. Surviving is a daughter: Michelle (Roy) Smith of New Port Richey, Florida; three sons: Michael Brodrick of New Port Richey, Florida, Raymond (Julia) Brodrick of Monmouth, Illinois, and Richard (Cheryl) Brodrick of East Peoria, Illinois; step-sons: William (Kay) White of Bloomington, Illinois, Richard (Teresa) White of Knoxville, Illinois, Rodney White of Miami, Florida, and Robert (Susie) White of Bettendorf, Iowa; twenty grandchildren, twenty-one great-grandchildren; his long-time companion, Debbie Young of Abingdon, Illinois; one sister, JuDee (Donny) Joseph of Galesburg, Illinois. He was preceded in death by his parents, wife, twin brother, and one sister. He worked as a warehouse supervisor for Dick Blick Art Materials for thirty-six years, retiring in 2002. He was a member of the Grace Lutheran Church of Knoxville, Illinois. He served in the United States Army from December 18, 1958 to March 8, 1962 as an MP at Fort Leavenworth, Kansas. He was an avid golfer and enjoyed spending time with his family and friends. Funeral services will be held at 10:00 A.M. on Friday, March 3, 2017 at the Hurd-Hendricks Funeral Homes and Crematory in Knoxville, Illinois the Rev. Michel D. Clark will officiate. Visitation will be held from 5:00 P.M. to 7:00 P.M. on Thursday, March 2, 2017 at the Hurd-Hendricks Funeral Homes & Crematory in Knoxville, Illinois. Burial will be in the Haynes Cemetery, rural Delong, Illinois Memorials may be made to the St. Jude’s Children’s Hospital, Big Brothers and Big Sisters, or to the Paralyzed Veterans of America. Visit www.hurd-hendricksfuneralhome.com to make on-line condolences. To send flowers or a memorial gift to the family of Raymond C. Brodrick please visit our Sympathy Store.
To send flowers to the family in memory of Raymond C. Brodrick, please visit our flower store.