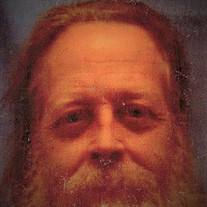 Randal W. Grappe, age 58 of Galesburg, IL formerly of Wataga, IL died on Saturday, March 24, 2018 at Aperion Health Care Center in Peoria Heights, IL. Randal was born on June 19, 1959 in Natchitoches, Louisiana, the son of Douglas W. and Dovie D. (Basco) Grappe. Surviving are three sons: Dustin Grappe of Peoria, IL, Timothy Grappe, and Randy Hardy, both of Galesburg, IL; one daughter, Amber Hardy of Galesburg, IL; one sister Sharon (Raymond) Huffman of Granger, Texas; three brothers, Rich (Lea) Grappe of Galesburg, IL, Carey (Cindy) Grappe of Jonesboro, LA, and Clark (Carole) Grappe of Edmond, OK. His girlfriend whom he shared ten years with, Julie Hall of Galesburg, IL. He was preceded in death by his parents and a brother, Timothy. Randal worked at the former butler manufacturing of Galesburg, IL and the Broadview Hotel in Galesburg, IL. He was self-employed and drove for It’s on the Way of Knoxville, IL. Randal enjoyed riding motorcycles, dirt bikes, going fishing and hunting mushrooms. He also served in the United States Army. Visitation will be from 5:00 P.M. to 7:00 P.M. on Monday, April 2, 2018 at the Hurd-Hendricks Funeral Homes & Crematory in Knoxville, IL. Memorial contributions may be made to the Family. Hurd-Hendricks Funeral Homes and Crematory in charge of services. To send flowers or a memorial gift to the family of Randal Wayne Grappe please visit our Sympathy Store.
To send flowers to the family in memory of Randal Wayne Grappe, please visit our flower store.