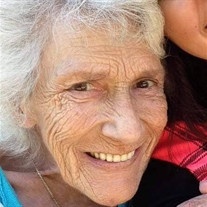 Patricia R. Scott, age 72, of Wataga, Illinois passed away surrounded by her two loving sisters at Marigold Rehabilitation & Health Care Center of Galesburg, Illinois. Patricia was born on September 9, 1944 in Rapid City, South Dakota the daughter of Lewis and Grace Cadwalder Shoop. She married Joe “Eddie” Scott on October 21, 1966 in Galva, Illinois. He preceded her in death on July 9, 2011. Surviving is a daughter: Deanna “Chuggie” (Bill) Lovell of Galesburg, Illinois; one step-son, Danny Scott of Galesburg, Illinois; fourteen grandchildren and nine great grandchildren; two sisters: Nancy (Ron) LaDuke of Oneida, Illinois and Judy (Roger) Sornberger of Williamsfield, Illinois; three brothers: LeRoy (Kay) Shoop of Wataga, Illinois, Danny (Jo) Shoop of Lake Havasu, Arizona, and Tim (Vicki) Shoop of Toulon, Illinois. She was preceded in death by her husband, one daughter, Dawn Young, one step-daughter, Debbie White, one brother, Sam Shoop and one sister, Betty Davidson. She graduated from Carl Sandburg College of Nursing, working for Galesburg Cottage Hospital in Galesburg, Illinois for 21 years. She enjoyed taking care of people, gardening and her grandchildren. Visitation will be held on Sunday, October 9, 2016 from 1:00 P.M. to 2:00 P.M. at the Hurd-Hendricks Funeral Homes & Crematory in Oneida, Illinois. Graveside services will be held for Patricia, her husband Joe “Eddie” and their daughter Dawn Young on Sunday, October 9, 2016 at 2:30 P.M. at the Victoria Cemetery, Victoria, Illinois with Rev. Milton Marquith Officiating. A fellowship luncheon will be held at the Victoria Log Cabin following the graveside services. Memorial contribution may be made to the family in care of Deanna Lovell. Online condolences may be left at www.hurd-hendricksfuneralhome.com. To send flowers or a memorial gift to the family of Patricia Scott please visit our Sympathy Store.
To send flowers to the family in memory of Patricia Scott, please visit our flower store.