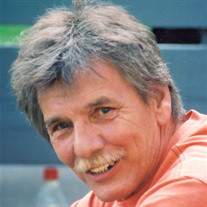 Neil T. Neckolaishen, 71, of Knoxville, Illinois passed away Monday, December 7, 2015 at OSF St. Mary Medical Center, Galesburg, Illinois. Neil was born on June 8, 1944 in Aurora, Illinois the son of Nick and Sally (Townsley) Neckolaishen. He was a graduate of East High, in Aurora. He married Kandi Tiffany in 1963. She preceded him in death in 1985. Neil later married Carol Healey on April 13, 1989 in Yorkville, Illinois, and she resides in Knoxville, Illinois. Neil was skilled at many jobs. He had the ability to fix anything. He was an auto body technician, golf cart mechanic, and he also worked in construction. Neil retired from the United States Postal Service after 18 years of service as a Postal Carrier. Neil was especially proud of his involvement with Alcoholics Anonymous. He began attending in 1990 and was very thankful for the fellowship, support, and friendships. It allowed him to have a wonderful life. He also enjoyed riding his Harley Davidson, golfing, and making crafts. Neil is survived by his wife; Carol Neckolaishen of Knoxville, Illinois, mother; Sally Neckolaishen of Blackduck, Minnesota, three daughters; Beth (and Vince) Rosas of Geneva, Illinois, Cheryl Adragna of Lake Orion, Michigan, Dava (and Kory) Duke of Galesburg, Illinois, 12 grandchildren and 2 great-grandchildren. He was preceded in death by his wife; Kandi Tiffany, father; Nick Neckolaishen; and sister; Annie Stegman. A memorial service will be held on Saturday, December 12, 2015 at 10:30 A.M. at the Hurd-Hendricks Funeral Home in Knoxville, Illinois. Rev. Michel Clark will be officiating the service. In-Lieu of flowers the family requests donations be made to the Serenity Club or to the cancer fund of the donor’s choice. Online condolences can be made at www.hurd-hendricksfuneralhome.com To send flowers or a memorial gift to the family of Neil T. Neckolaishen please visit our Sympathy Store.
To send flowers to the family in memory of Neil T. Neckolaishen, please visit our flower store.