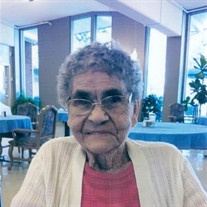 Naomi Jones, 94, of Knoxville, Illinois formerly of Dahinda, Illinois died at 10:50 P.M. Friday, September 30, 2016 at Knox County Nursing Home, Knoxville, Illinois. She was born on December 29, 1921, the daughter of Bert and Delamay Whorley Kasparie. She first married Wilbert Kelso, he preceded her in death in April of 1961. She later married Charles Jones and he preceded her in death in 2009. Naomi never knew a stranger; she was always there to help anyone that she knew. She had many friends and was liked by everyone She was the most giving person to many. She loved the outdoors and her gardening was one of her favorite hobbies and she would go to town and set up her stand just about every day in the summer months so she could sell her vegetables. She also loved her many farm animals. She was very active in the Spoon River Scenic Drive for many years. She will be missed by all. Naomi is survived by her three sons, Henry “Hank” (Phyllis) Kelso of East Galesburg, Illinois, Bert Kelso of Galesburg, Illinois, and Francis (Marlyn) Kelso of Gilson, Illinois; one daughter-in-law, Kathy Kelso of Galesburg, Illinois; 5 grandsons, Mark, Russell, John, William, and Robert Kelso; 6 granddaughters, Connie Godfrey, Naomi Kelly, Delores Poplett, Shannon Kelso, Mary Jo Brooks, and Lynn Price; and many great grandchildren. She is also survived by one brother, August (Sylvia) Kasparie of Florida; one sister, Delores Gough of Knoxville, Illinois; one sister-in-law, Sarah Kasparie of Missouri; and many nieces and nephews. She was preceded in death by her parents, husbands, two sons, Lester and Glenn Kelso, one daughter-in-law, Brenda Kelso, four grandchildren, Serita Jefferson, Angela, Lisa, and Michael Kelso, three brothers, John, Glenn, and Marion Kasparie, and one sister, Eva Agans. Funeral Service will be at 11:00 A.M. Wednesday, October 5, 2016 at Hurd-Hendricks Funeral Home, Knoxville, Illinois. Visitation will be held one hour prior from 10:00 A.M. to 11:00 A.M at the funeral home. Rev. Dan Lybarger will officiate. Burial will be in Knoxville Cemetery. Memorials may be made to the family. Hurd-Hendricks Funeral Home in Knoxville, Illinois is in charge of arrangements. Online condolences may be sent through www.hurd-hendricksfuneralhomes.com To send flowers or a memorial gift to the family of Naomi Jones please visit our Sympathy Store.
To send flowers to the family in memory of Naomi Jones, please visit our flower store.