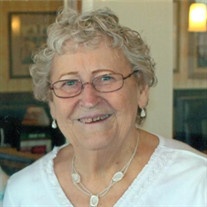 Myra L. Brown Stickle, age 80, of Oneida, Illinois, died at 10:44 A.M. on Monday, March 20, 2017 at OSF St. Mary`s Medical Center in Galesburg, Illinois. She was born on August 1, 1936 in Galesburg, Illinois, the daughter of Otis Brown and Grace Smith Brown. She married Clyde James Stickle on June 20, 1954 at the First Christian Church in Galesburg, Illinois. Surviving are two daughters, Mary Jo (Thomas) Dennis of Woodhull and Diana (Alan) Cooper of Victoria and one son, Rodney (Cheryl) Stickle of Mokena, Illinois; eleven grandchildren, Michael (Sheri) Dennis, Sarah Dennis (Skip Simms), Melinda (James) Angelotti, Jayme Stickle (Jared Brown), Myranda Anderson, Jennifer Stickle, David Stickle, Carley Cooper, Courtney Melton, Andrea Cooper and Abigail Cooper; five great-grandchildren, Mark and Brian Dennis, Addison, Carter and Camden Angelotti; two sisters, her twin sister, Myrl (Brown) Simons of Vicksburg, Mississippi and Dora (Brown) Bulson of Galesburg, Illinois. She was preceded in death by her husband, Clyde, son, James Stickle, her parents, five brothers, Leroy, Laverne, Dale, Phillip and Frank; one sister, Evelyn Mize and two grandchildren, Steven Dennis and Melanie Stickle. She was raised and educated in Galesburg, Illinois, graduating from Galesburg High School in 1954. She was a member of the United Church of Oneida in Oneida, Illinois, The Oneida United Presbyterian Women and Board Trustee of Greig Memorial Library in Oneida, Illinois for over forty years. She was a Sunday school teacher and choir member. With her husband, Clyde, Myra was an avid gardener and enjoyed growing and preserving fruits and vegetables. She enjoyed looking after her children and grandchildren, along with the children of many local parents and school teachers, all were her children. Funeral services will be held on Friday, March 24, 2017 at 10:00 A.M. at the United Church of Oneida in Oneida, Illinois with Rev. David Pyell officiating. Visitation will be held on Thursday, March 23, 2017 from 6:00 P.M. – 8:00 P.M. at the Hurd-Hendricks Funeral Home in Oneida, Illinois. Burial will be at the Oneida Cemetery in Oneida, Illinois. Memorials may be made to the United Church of Oneida or the Greig Memorial Library in Oneida, Illinois. Hurd-Hendricks Funeral Home & Crematory of Oneida are in charge of the arrangements. On-line Condolences may be made through www.hurd-hendricksfuneralhome.com. To send flowers or a memorial gift to the family of Myra L. Brown Stickle please visit our Sympathy Store.
To send flowers to the family in memory of Myra L. Brown Stickle, please visit our flower store.