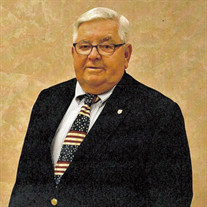 Michael L. Hennenfent, 75, of Knoxville, IL, died on Sunday, August 2, 2020, 3:50 PM, at OSF St. Mary Medical Center, Galesburg. Mike was born May 31, 1945, in Galesburg, Illinois to Leo A. Hennenfent and Shirley (Cunningham) Hennenfent, who both preceded him in death. He was raised in rural Knox County, the oldest of ten children. He graduated from Galesburg High School in 1963 and attended Ag Short Course at the University of Illinois. Mike is survived by his Wife of 54 years, Judith A. (Palmer) Hennenfent, Daughter, Julie Hennenfent of Galesburg, and two Sons, William (Becky) Hennenfent of Gilson, and Matthew Hennenfent of Gilson; six grandsons, Nicholas Hennenfent, Benjamin Norville, Ryan Hennenfent, Blake Hennenfent, Case Hennenfent and Dane Hennenfent. He is also survived by his nine siblings, Margaret (Peg) Hannam, of Galesburg, Connie Smith, of Gilson, Becky Conley, of Clinton, IA, Mary (Mark) Ebert, of Kewanee, Daniel (Marcy) Hennenfent, of Ottawa, Patrick (Kim) Hennenfent, of Wataga, John (Holly) Hennenfent, of Galesburg, Robert Hennenfent, of Wataga, and Jeffrey (Merris) Hennenfent, of Dahinda, and many nieces and nephews. Along with his parents, Mike was preceded in death by a Granddaughter at birth, a Daughter-in-Law, Marcy Hennenfent, a Sister-in-Law, Christine Hennenfent and Brothers-in-Law, James Smith and William (Larry) Conley. From a young age, Mike was highly involved in agriculture. He was a member of the Henderson Aggies 4-H Club, Galesburg FFA and Knox County Farm Bureau Young Farmers where he held many leadership positions. He also was on the Knox County 4-H Federation Board as well as an attendee of the 4-H Club Congress. Later he was on the State Young Farmers Committee. He also served on the Knox County Pork Producers, Knox County Cattlemen’s Association, Knox County Corn Growers, State Corn Growers, Knox County Farm Bureau and Knox County 4-H and Extension Foundation Boards. Mike served on the local FS board for decades that led him to serve on the Growmark Board for 9 years. Mike did not limit his activities only to agriculture as he was a member of Immaculate Heart of Mary Church of Galesburg where he served as a Eucharistic Minister and attended St. James Catholic Church of Williamsfield with his grandsons. He was also a past Knoxville School Board Member as well as past President of the Knoxville School Board. He was also a 10-gallon blood donor to the American Red Cross, he served on the Appleton Fire Department and a current member of the Knoxville FFA Alumni Committee. Mike was the proud recipient of many awards. At a young age, he received the National Tractor Award at 4-H Club Congress. Later he was the Jaycees Outstanding Young Farmers Illinois State Winner in 1980 and a National Outstanding Young Farmer Winner in 1981. He went on to be Outstanding Farmers of America Fraternity President. In 1996, Mike was named Prairie Farmer Master Farmer and in 2018 he was named to the Illinois 4-H Hall of Fame. Mike semi-retired from farming in 2015. He was a dedicated father and grandfather. Nothing made him prouder than working alongside his sons and grandsons on the family farm. His hobbies included participating in any event his grandsons were involved in. He loved watching them play football, baseball and especially show their home raised cattle. He was an avid Cardinal fan (even though his immediate family members were all Cubs fans). Visitation will be from 4 to 8 p.m. Thursday, August 6 at Hurd Hendricks Funeral Home, Knoxville, Illinois. Funeral Mass will be offered at 10:00 a.m. on Friday, August 7 at Immaculate Heart of Mary Church, Galesburg, Illinois, with Graveside Services following mass at the Knoxville Cemetery at 11:30. Memorials may be made to the Knox County Farm Bureau Foundation or the Knox County 4-H and Extension Foundation. Due to COVID-19 restrictions, face masks, social distancing and attendance limitations will be required. On-line condolences or expressions of sympathy may be made through www.hurd-hendricksfuneralhome.com. To send flowers or a memorial gift to the family of Michael L. Hennenfent please visit our Sympathy Store.
To send flowers to the family in memory of Michael L. Hennenfent, please visit our flower store.