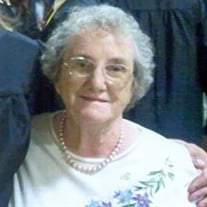 Mary F. Westfall, 84, of Galesburg, Illinois, died at 9:10 A.M. on Saturday, December 17, 2016 at the Knox County Nursing Home in Knoxville, Illinois. She was born on July 13, 1932 Wataga, Illinois the daughter of George and Dorothy Steele Kunkle. She married Russell Oris Westfall on June 21, 1952 in Galesburg, Illinois. He preceded her in death on December 12, 2008 She attended and graduated from Galesburg High School, Class of 1950. She was a homemaker and a Care Giver. Mary was a member of the Wataga Congregational Church, but attended Four-Square Baptist in Galesburg, Illinois. She was a member of the Wataga Senior Citizens Club. Mary loved flowers and gardening, going to the River Boat and she also enjoyed metal detecting. Mary is survived by her children, Russell O. (Vicki Smith) Westfall Jr. of Wataga, Illinois and Marlene F. (Randy) Schoonover of Rushville, Illinois; four grandchildren, Bob Bewley of Henderson, Illinois, Jeri Lynn (Barry) Maulden of Knoxville, Illinois Brandy Simer of East Peoria, Illinois and Jason Hoke of Macomb, Illinois; eight great-grandchildren, Allyson, Nicholas, Justice, Brianna, Kylie, Zach, Tanner and Hannah; one great-great-grandchild, Kayson; Siblings, Patty Scott of Galesburg, Illinois and Richard (Pat) Kunkle of Knoxville, Illinois. She was preceded in death by her parents, her husband, one son; Roger Lee, one brother; Ronnie and one sister; Sandy Newman. Visitation will be held on Wednesday, December 21, 2016 from 4:00-6:00 P.M. at the Hurd-Hendricks Funeral Home in Knoxville, Illinois. Memorials may be made to the Wataga Congregational Church of Wataga, Illinois or Four-Square Baptist Church in Galesburg, Illinois. Burial will be held at a later date. Online condolences may be sent through www.hurd-hendricksfuneralhomes.com To send flowers or a memorial gift to the family of Mary F. Westfall please visit our Sympathy Store.
To send flowers to the family in memory of Mary F. Westfall, please visit our flower store.