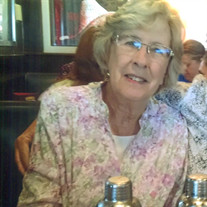 Mary E. Peterson, 91, of Knoxville, died at 10:55 A.M. on Sunday, April 16, 2017 at her daughter`s home in rural Gilson, surrounded by her family. Mary was born on November 25, 1925, in Monmouth, Illinois the daughter of Gertrude E. Holt. She graduated from High School in 1944 from Marshalltown, Iowa. She then attended George Washington University with a Nursing Home Administration Degree. She married Robert G. “Pete” Peterson on June 1, 1945 in Knoxville, Illinois. He preceded her in death on April 8, 2016. She is survived by her children, B. Christine (Robert) Bailey of Rural Gilson, Illinois and Charles (Jean Ann) Peterson of Knoxville; grandchildren, Mary (Byron) Austin of Knoxville, V. Lynn Klossing of Galesburg, Rachel Kennedy of Knoxville and Eric (Sarah) Peterson of Galesburg and 10 grandchildren. Mary was preceded in death by her mother, Gertrude Kinney and her husband, Robert G. Peterson. She was employed by the Knox county Nursing Home in Knoxville, Illinois for 23 years, serving as its’ Administrator for 10 years. She was a member of Knoxville Women’s Club, 25 year member and past president of the M.I. Club, and she enjoyed spending time with her special group of friends (“The Troop”) and was an Altrusa Emerites. Mary was a 70 year member of the Grace Lutheran Church of Knoxville, the Grace Lutheran Church of Knoxville`s Knitting Circle, the Knox County Nursing Retirees and the Historic Sites. Cremation rites will be accorded. A visitation will be held on Thursday, April 20, 2017 from 9:00 A.M. – 11:00 A.M. at the Grace Lutheran Church in Knoxville, Illinois. Funeral services will follow the visitation at 11:00 A.M. Rev. Michel D. Clark will officiate. Memorials may be made to the Grace Lutheran Church in Knoxville or a charity of the donor`s choice. Burial will be at the Knoxville Cemetery in Knoxville, Illinois. Online condolences can be made at www.hurd-hendricksfuneralhome.com. To send flowers or a memorial gift to the family of Mary E. Peterson please visit our Sympathy Store.
To send flowers to the family in memory of Mary E. Peterson, please visit our flower store.