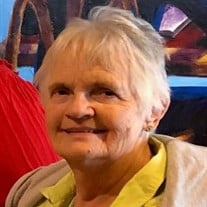 Mary Ellen Allbaugh, age 80, of Knoxville, Illinois, died at 10:19 A.M. on Monday, October 14, 2019 at the OSF Saint Francis Medical Center in Peoria, Illinois. She was born on June 20, 1939 in Great Falls, Montana, the daughter of Herman G. and Jeanette (Spoelder) Bouma. She was raised in Choteau on the family farm. Mary Ellen went on to attend Western Montana College, graduating with a Bachelor of Science in Education in 1962. She later entered the post graduate program at Chapman University in Tucson, Arizona, earning her Master’s degree in 1988. She is survived by her loving husband of fifty-six years Allen L. Allbaugh of Knoxville; their three daughters: Dianna (and John) Hillebrand of Farmington, Illinois, Juileen (and Donald) Hummel of Chillicothe, Illinois, Dan’Neile (and Matt) Comandini of Knoxville; and seven grandchildren: Christopher and Bryce Hillebrand of Farmington, Steven, Tony, Mari Beth, and Angelina Comandini of Knoxville, and Lauralana Hummel of Chillicothe. She is also survived by six siblings: Ann (and James) Stratton of Stoughton, Wisconsin, Willard Bouma (and Darlene) of Ford, Washington, Florence (and Ron) Frady of Claremont, North Carolina, Edward Bouma of Choteau, Montana, Howard Bouma of Choteau, Montana, Joyce (and Edwin) Kenney of Prescott, Arizona; and a sister-in-law, Marie Bouma. She was preceded in death by her parents; and one brother, Peter Bouma. Mary Ellen began her career as an elementary school teacher in the Great Falls School District, working there from 1962 to 1964. She then went on to teach in Oregon at the Salem School District from 1967 to 1968, and then worked as a substitute teacher in Washington at the Sultan School District from 1972 to 1976. After this, she went on to work at a laundry facility, a Veterans Administration Hospital in Knoxville, Iowa, and then as a manager of Colonial Mobile Home Park in Tucson, Arizona. She returned to teaching in 1986, working as an elementary instrumental aide in Tucson at the Elvira School, eventually working at the Pima Community College in Tucson as an instrumental assistant for computer and reading. She was a specialty instructor with reading and math with the Tucson Prison educational program through Pima Community College, while also working within the Sunnyside School District as a substitute teacher. Mary was a teacher for the Tucson Catholic Diocese until 2004. During her time in Tucson, she was a member of the planning committee for an all-day kindergarten from 1987 to 1988, as well as a member of the parent council of Chaparral Junior High School in Tucson during the same year. She also belonged to SEPAC – Sunnyside School District, since 1993. She was a dedicated member of their church for over fifty years, twenty-three of those years were spent in the Tucson’s congregation, later attending services in Canton, Illinois. Education was her passion in life, and she was even recognized as a noteworthy reading educator by Marquis Who’s Who. Mary Ellen greatly enjoyed reading and teaching. She was also very talented at knitting and crocheting, and loved going for walks. She was a member of the Knoxville Women’s Club. Throughout her years of teaching, Mary Ellen was able to touch many lives and change them for the better, instilling her great love of education in her students. She was a wonderful, loving, and devoted wife, mother, grandmother, sister, and friend, and she will be deeply missed by all who knew and loved her. Visitation will be held on Sunday, October 27, 2019 from 12:00 P.M. to 2:00 P.M. at the Hurd-Hendricks Funeral Home & Crematory in Knoxville, Illinois. The funeral service will be held at 2:30 P.M. on Sunday, October 27, 2019 at the funeral home. A fellowship gathering will directly follow the funeral service at the Hurd-Hendricks Fellowship Center in Knoxville. A private interment will take place at a later date at the Knoxville Cemetery. Memorial contributions may be made to the family or to a charity of the donor’s choice.
To send flowers to the family in memory of Mary Ellen Allbaugh, please visit our flower store.