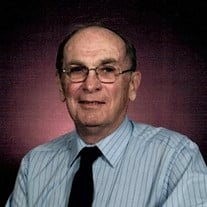 Marlyn B. Reynolds, age 84, of Altona, Illinois, died at 12:57 A.M. on Wednesday, January 29, 2020 at the OSF Saint Mary Medical Center in Galesburg, Illinois. He was born on May 18, 1935 in Galesburg, the son of Ward and Adelaide (Bevier) Reynolds, and was raised on the Reynolds farm near Altona. He attended Altona schools and graduated from ROVA High School in Oneida with the class of 1953. After high school, he went on to graduate from the University of Illinois with a degree in Agriculture in 1958. While there, he fell in love with Betty Lockhart and they were joined in marriage on February 2, 1958. After graduating, they came back and farmed the Reynolds farm together. While farming, he also briefly worked at Admiral in Galesburg, International Harvester, and John Deere in Moline before he went on to work for the Rock Island Arsenal, where he retired in 1992. He received a Master of Science degree from the Florida Institute of Technology in 1977. In 1987, Betty and Marlyn moved to Germany for three years as a part of being employed by the Rock Island Arsenal. He was also transferred to Saudi Arabia for six months in 1990. Betty preceded Marlyn in death in 1999. While employed by First Bank in Galesburg, he met and fell in love with Patsy Boone. They were married on February 26, 2000 in Galesburg. Left to cherish Marlyn’s memory are his loving wife of nearly twenty years, Patsy Reynolds of Altona; his children: Lisa (and Byron) Schafer of Altona, Tim (and Cindy) Reynolds of Altona; four grandchildren: Chris (and Amber) Reynolds of Altona, Steve (and Valerie) Reynolds of Somerset, Kentucky, Barak Schafer of Camp Pendleton, California, Kaylyn Schafer (and Zacrey Magee) of Altona; two step-daughters: Anne (and Dale) Littrel of Aledo, Sue (and Scott) Hoover of Frankfort, Illinois; two step-granddaughters: Nikki (and Bryce) Holmes of rural Joy, Illinois, Andrea Hoover of Carbondale, Illinois; three step-great-grandsons: Carson, Brady, and Garrett Holmes of rural Joy, Illinois; two siblings: Edith Crocker of Middletown, Ohio, and George (and Donna) Reynolds of Altona; and many nieces and nephews. He was preceded in death by his parents; and one sister, Valerie Reynolds. Marlyn was a dedicated member of the Bethel Baptist Church in Galesburg. He greatly enjoyed traveling, especially going on fishing trips to Minnesota, as well as farming and everything that farm life entailed. However, what he loved most of all was spending quality time with his family and friends. Cremation rites will be accorded. Visitation will be held on Saturday, February 8, 2020 from 1:00 P.M. to 3:00 P.M. at the Hurd-Hendricks Funeral Home in Oneida, Illinois. The memorial service will directly follow at 3:00 P.M., Pastor Scott Wilson officiating. In lieu of flowers, memorial contributions may be made to the Bethel Baptist Church or to the Galesburg Rescue Mission. To send flowers or a memorial gift to the family of Marlyn B. Reynolds please visit our Sympathy Store.
To send flowers to the family in memory of Marlyn B. Reynolds, please visit our flower store.