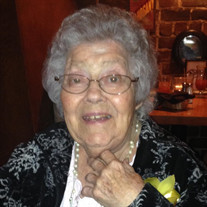 Marjorie L. Mathews, age 89, of Knoxville, Illinois, passed away on October 20, 2017 at 3:20 A.M. at the Marigold Healthcare Center in Galesburg, Illinois. She was born on January 14, 1928 in DeLong, Illinois, the daughter of Charles and Loreta (Ferris) McCoy. Marjorie graduated from Gilson High School, and participated in cheerleading during her attendance there. She worked briefly at the former Holiday Inn as a baker. She married D. Dean Mathews on August 8, 1946 at the United Methodist Church in Knoxville, Illinois. He preceded her in death on June 17, 2007. Marjorie’s children are: the late Geral L. (Sharon) Mathews of Galesburg, Illinois, Glade E. (Sue) Mathews of Saint Charles, Missouri, Gregory D. (Donna) Mathews of Galesburg, Illinois, and the late Gale W. Mathews of Knoxville, Illinois. She is survived by her eight grandchildren: Thomas Mathews, Renée Mathews, Derek (Wanda) Mathews, Rev. Dane (Teresa) Mathews, Denise (Jeff) Kubik, Dustin (Liz) Mathews, Ashley Mathews, Justin Leaf; and eleven great-grandchildren: Lily and Liam Mathews; Emma, Dalen, Benjamin, and Ethan Mathews; Alec and Nicholas Kubik; Isabella and Catcher Mathews; and Addelyn Wiscons. She was preceded in death by her parents, husband and two children. She was an active member of the Knoxville United Methodist Church. She was also a member of the Royal Neighbors of America, as well as an active member of the Knoxville chapter of TOPS. She enjoyed decorating cakes and baking pies, as well as taking care of and spending time with her family. Visitation will be held on Sunday, October 22, 2017 from 4:00 P.M. to 8:00 P.M. at the Hurd-Hendricks Funeral Home and Crematory in Knoxville, Illinois. The Funeral Service will be held on Monday, October 23, 2017 at 11:00 A.M. at the Knoxville United Methodist Church in Knoxville, Rev. Dave Sholl and Rev. Dane Mathews officiating. Burial will be at the Haynes Cemetery in DeLong, Illinois at a later date. Memorial contributions can be made to the Knoxville United Methodist Church, Galesburg Rescue Mission, and Hospice Compassus. Online condolences or expressions of sympathy can be made through www.hurd-hendricksfuneralhome.com. To send flowers or a memorial gift to the family of Marjorie L. Mathews please visit our Sympathy Store.
To send flowers to the family in memory of Marjorie L. Mathews, please visit our flower store.