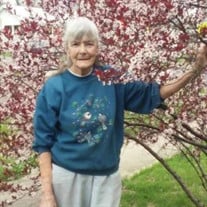 Maralene Joanne Baughman, mother, sister, grandmother, and friend died just short of the age of 88 on January 31, 2021. Native to Abingdon, Illinois, she was born on February 1, 1933 to Joseph and Ruth Ann Whitney. She was baptized on March 23, 1947 in the Methodist Church of Abingdon and professed her love of God openly to those who would take the time to listen. She married Robert K. Baughman with whom she had five beloved children, Terry, Karin, Steven, Kathy, and Brenda. Later in her journey, she met the love of her life, Pearl “Perry” Loftin. They adored each other and often spent their free time fishing and enjoying the outdoors with one another. For Maralene though, this was not to last as Perry proceeded Maralene in death. She was a natural caregiver, providing help to anyone who needed it. This even stretched into her love of plants and flowers that were displayed throughout her home. One of Marlene’s favorite hobbies was to cook, which she loved. Often some of her favorite recipes, such as fried chicken and cinnamon apples, were made while she listened to country and gospel (her favorites) music. By far her proudest achievement in life was being a mother, grandmother, and great-grandmother. The blueprint of taking care of others before yourself will never be forgotten, especially by all her family. Her smile, warmth, and loving nature will be sorely missed by all of those for who she touched in life. Surviving are her children Terry Baughman, Steven Baughman, and Brenda Sellon all of Galesburg. Karin Pierson of Knoxville. Her 11 grandchildren Kandy (Douglas) Mecum, Sean Seibert, Steven “Carl” (Cristin) Baughman, Randy (Holly) Pierson, Nichole Seibert, Amanda (Justin) Ahlberg, Phillip (Caitlyn) Baughman, Carol Castillo, Cory Baughman, Malorie Johnson, Hannah (Tyler) Garza. 19 great grandchildren Kelsie, Kara, Emma, Sophie, Beatrice, Blade, Tracey, Alex, Jacob, Annelise, Addilynn, Kohyn, Parker, Malachi, Paco, Dixon, Caleb, Cameron, Carson, and Aylah. 3 great great grandchildren Karson, Ryleigh and Karleigh. One brother Bill Whitney of Abingdon. She was preceded in death by her daughter Kathy Jackson. Funeral services will be held 11:00 AM, Saturday, February 6, 2021, at the Abingdon United Methodist Church, 401 N. Washington Street, Abingdon, Illinois, 61410. Rev. Vincent Marolla will officiate. Burial will follow services at the Abingdon Cemetery. Hurd-Hendricks Funeral Homes and Crematory, Knoxville has been entrusted with arrangements. Due to COVID-19, face masks, social distancing and attendance limitations will be required. Memorials may be donated to the family to help with funeral expenses. Online condolences may be left to the family at www.hurd-hendricksfuneralhome.com. To send flowers or a memorial gift to the family of Maralene Joanne Baughman please visit our Sympathy Store.
To send flowers to the family in memory of Maralene Joanne Baughman, please visit our flower store.