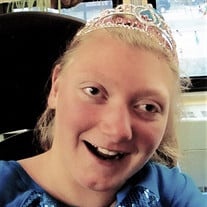 Maci N. Mulvey, age 19, of East Galesburg, Illinois died at 5:06 P.M. on Monday, April 22, 2019 at the OSF Saint Francis Medical Center in Peoria, Illinois. Maci was born on December 20, 1999 at the Cottage Hospital in Galesburg, Illinois, the daughter of Dennis and Michelle (Lamberson) Mulvey. She attended and graduated from the Knoxville Senior High School in 2018. Surviving are her parents, Dennis and Michelle Mulvey of East Galesburg; her sister, Ali Mulvey, and her brother, Hunter Mulvey, both of East Galesburg; maternal grandparents, Terry Lamberson and Alicia Lamberson of Knoxville, Illinois; paternal grandparents Dale and Donna Mulvey of East Galesburg; and maternal great-grandmother, Jacqueline Toland of Knoxville. Also surviving is a special friend, Ashley Miner of Galesburg; and many cousins, aunts and uncles, who loved her dearly. She was preceded in death by her paternal grandparents, Carol and Floyd LaGrow; maternal great-grandparents: Robert Toland, Floyd and Mary Lamberson; and paternal great-grandparents, Oscar and Gladys Mulvey. She loved boating and camping with her family and listening to rap music. She enjoyed Seth singing to her at school and Elise pushing her in her wheelchair around the school. Visitation will be held on Saturday, April 27, 2019 from 2:00 P.M. to 5:00 P.M. at the Jensen Gymnasium of Knoxville High School in Knoxville, Illinois. The funeral service will be held on Sunday, April 28, 2019 at 2:00 P.M. at the Jensen Gymnasium of Knoxville High School in Knoxville, Rev. Jordan Knight officiating. Interment will be at the Knoxville Cemetery in Knoxville. Memorial contributions may be made to the family. To send flowers or a memorial gift to the family of Maci N. Mulvey please visit our Sympathy Store.
To send flowers to the family in memory of Maci N. Mulvey, please visit our flower store.