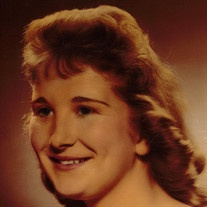 Lynda R. Nelson, age 77, of rural Gilson, Illinois passed away at 9:30 A.M. on Friday, March 23, 2018 at her home in rural Gilson, Illinois. Lynda was born on December 12, 1941 in Iowa, the daughter of Clarence and Mary (Parks) Hutchison. She attended and graduated from Knoxville High School, the class of 1959. She married Raymond A. Nelson on November 21, 1959 at the United Methodist Church in Knoxville, Illinois. Surviving is her husband, Raymond Nelson of rural Gilson, Illinois; a daughter, Pamela K. Churn of Galesburg, Illinois; a son, Kenneth E. Nelson of Rural Gilson, Illinois; four grandchildren and thirteen great grandchildren. Also surviving is a brother, Jim Hutchison of Galesburg, Illinois; and a sister, Alice Johnson of Galesburg, Illinois. He was preceded in death by her parents and one son Randy Nelson. She was a home maker and house wife, helping with the farm and raising her family. She also worked in the Deli and the former Ron’s Red Fox and IGA in Knoxville, Illinois. She was of the Methodist faith and enjoyed gardening and cooking. Visitation will be held from 5:00 PM to 7:00 PM on Wednesday, March 28, 2018 at the Hurd-Hendricks Funeral Homes & Crematory in Knoxville, Illinois. Funeral Services will be held at 11:00 A.M. on Thursday, March 29, 2018 at the Hurd-Hendricks Funeral Homes & Crematory in Knoxville, Illinois, with Rev. Darrell Grimm officiating. Interment will be at the Gilson Cemetery in Gilson, Illinois. Memorial contributions may be made to the OSF Hospice. To send flowers or a memorial gift to the family of Lynda R. Nelson please visit our Sympathy Store.
To send flowers to the family in memory of Lynda R. Nelson, please visit our flower store.