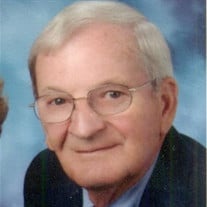 Lowell (Curly) Johnson, 90, of Oneida, passed away at the Knox County Nursing Home on February 20, 2016. He was born in Oneida, IL on November 22, 1925 to Glenn and Florence Raabe Johnson. He married Donna Jean (Jeanie) Moe on February 22, 1953 in Victoria, Illinois. He was a graduate of Oneida High School where he was an outstanding athlete in all sports, especially, basketball. He attended Monmouth College, served with the 103rd Cactus Infantry Division during World War II, serving in Germany and France. During the Battle of the Bulge he was wounded. He received the Purple Heart, Good Conduct Medal, and Combat Infantry Badge. Returning home, he operated Johnson Sales & Service in Oneida, an automobile dealership, for forty years until his retirement in 1986. After retiring, he and his wife enjoyed thirteen years spending the winter months in Arizona. He was a member of the United Church of Oneida where he served many years as the church treasurer. He was a charter member of the former Oneida Lions Club, served several terms on the Oneida City Council and managed Oneida Little League teams for many years. He was so proud of his children and grandchildren. He enjoyed playing golf, and spending the winters in Arizona. He is survived by his wife, Jeanie, three sons Reed Johnson (Marci) of Gilbert, AZ, David Johnson of Peoria, IL, Dr. Steve Johnson (Sharon) of New Orleans, LA. and three grandchildren, Bryce Johnson (Rachael) of Charlottesville, VA, Brooks Johnson (Ashlyn) of Provo, Utah, and Macy Johnson of Gilbert, AZ and his brother, Berkley (Carolyn) Johnson of Visalia, CA. He was preceded in death by his parents. Visitation will be held Saturday, February 27, 2016 from 12:30 p.m. – 2:30 p.m. at the United Church of Oneida. Funeral services will immediately follow at 2:30 p.m. Rev. David Pyell will officiate. Interment will be at the Oneida Cemetery with military rites conducted by the Rylander-Milroy American Legion Post #727. Memorials may be made to the ROWVA School Foundation or the United Church of Oneida. On-line condolences and sympathy cards may be sent through www.hurdhendricksfuneralhome.com To send flowers or a memorial gift to the family of Lowell Johnson please visit our Sympathy Store.
To send flowers to the family in memory of Lowell Johnson, please visit our flower store.