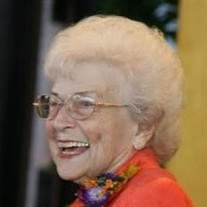 Lois Marian Lingwall Helble, 95, of Oneida, Illinois passed away at 9:30 A.M., Friday, August 17, 2018 at Seminary Manor in Galesburg, Illinois. Lois was born March 30, 1923 in Altona, Illinois, the daughter of Oliver P. Nelson and Vera B. (Anderson) Nelson. She was reared and educated in Altona, graduating from Altona High School and later Monmouth College. She married John Lingwall on June 28, 1945 in Altona, and later married Rodger Olson on December 26, 1971 in Galesburg. She later married Don Helble on May 24, 1985 in Peoria, Illinois. Lois was Oneida’s first Kindergarten teacher back in the late 1950s. The class was sponsored by the Oneida Women’s Club at that time. She later taught the 2nd grade for the ROVA School District in Altona for many years, retiring in 1973. She was a former member of the Galesburg Presbyterian Church, Oneida Presbyterian Church, Oneida Library Board, Oneida Women’s Club and the ROVA PTA. She is survived by her 2 daughters: Christine (David) Ahlstrand of Geneseo, Illinois, Marcia (Rick) Brown of Wataga, Illinois, 4 grandchildren: Amanda (Gareth) Ahlstrand-Rees, David (Stephanie) Ahlstrand, Nathan (Amy) Brown, Justin (Cara) Brown, and 6 great-grandchildren: Rosie, Owen, David, Elle, Jett, and Kenley. Lois was preceded in death by her parents, husbands, and her brother and sister-in-law, Wayne and Esther Nelson. Visitation will be held on Saturday, September 1, 2018 from 10:30 A.M. to 11:30 A.M. at the Hurd-Hendricks Funeral Home in Oneida, Illinois. A memorial service will directly follow the visitation. Memorial contributions may be made to the Greig Memorial Library or the United Church of Oneida. To send flowers or a memorial gift to the family of Lois M. Helble please visit our Sympathy Store.
To send flowers to the family in memory of Lois M. Helble, please visit our flower store.