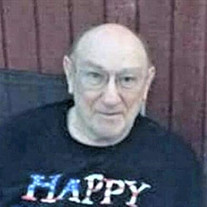 Lewis W. Crouch, Sr., age 85, of East Galesburg, Illinois died at 7:34 P.M. on Sunday, August 19, 2018 at his home. He was born on March 30, 1933 in Galesburg, Illinois the son of Eugene and Zella (Ross) Crouch. He married LaJean Dickerson on January 23, 1953 in Abingdon, Illinois. She preceded him in death on October 5, 1998. He later married Pauline Yarde on January 23, 2004 in Galesburg, Illinois. She preceded him in death on November 24, 2013. Surviving are his children: Willie (Tina) Crouch, Jr. of Gilson, Illinois, Kim Palmer of Knoxville, Illinois, Sue (Greg) Flores of Lake Bracken, Illinois, Gerald “Bussy” (Paula Miller) Crouch of Galesburg, Illinois, and Shelly (Josh) Knox of Kansas City, Kansas; thirteen grandchildren; and nine great-grandchildren. He was preceded in death by his parents and wives. He worked for the former Maytag of Galesburg, Illinois for forty-two years. After he retired he worked as a security guard for Maytag for several years. He also worked as a crossing walk guard at Nielson Grade School in Galesburg, Illinois. He was a member of the Knoxville Masonic Pacific Lodge # 66 A.F. & A.M. and the Sublime Prime of the Royal Secret. He enjoyed fishing. Visitation will be held from 11:00 A.M. to 1:00 P.M. on Saturday, August 25, 2018 at the Hurd-Hendricks Funeral Homes & Crematory in Knoxville, Illinois with Masonic Services at 1:00 P.M. There will be no funeral. Private graveside services will be held at a later date. Memorials may be made to the Knoxville Masonic Pacific Lodge #66 A.F. & A.M. To send flowers or a memorial gift to the family of Lewis W. Crouch please visit our Sympathy Store.
To send flowers to the family in memory of Lewis W. Crouch, please visit our flower store.