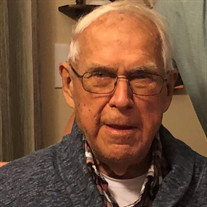 Lester DeWayne Carlson, 82, of Washington IL (formerly of Oneida), passed away on Wednesday, December 16, 2020 7:40 AM at home with his wife and sons at his side. Les was born on October 30, 1938 in rural North Henderson. He was the son of Arthur C. and Mabel D. (Blick) Carlson. Les married Connie Sornberger on November 14, 1964 at the United Methodist Church in Victoria. Together they celebrated and created a life that spanned 56 years. He is survived by his loving wife, Connie; sons, Doug of Lockport, Dirk and Misty of Ormond Beach, Florida and Devin and Lea of Eureka; five grandchildren, Briggs Carlson, Pava Carlson, Crew Carlson, Taylor Howland and Kylee Howland; mother-in-law, Ruth Sornberger of Knoxville; brother-in-law, Roger and Judy Sornberger of Williamsfield; and many nieces and nephews. He was preceded in death by his parents; siblings, Dale and Carol Carlson, Gerald and Edna Carlson, and Glennis and Dick Eyler; and father-in-law, Sterling Sornberger. Les attended Liberty School in rural Kirkwood. He was a 1956 graduate of Kirkwood High School. Les served with the Illinois Army National Guard from 1956-1963. In 1960, Les received his Bachelors of Science Degree in Accounting from Western Illinois University. He worked for W.A. Jordan Company before he took a position as comptroller for Distillers and Brewers Sales Company. He retired after 32 years of dedicated service with them. Les was a member of the Immanuel Lutheran Church of Altona for over 40 years. He served on the church board as treasurer for eight of those years. Les was a volunteer for Galesburg Cottage Hospital for 14 years. He was an avid St. Louis Cardinals fan. Most importantly, Les was a dedicated family man. He was supportive, always making sure that he did not miss a game, concert, or important event that his children or grandchildren were involved in. Les was a man of faith, family, and humor. He was loved by many and will be greatly missed by those who were blessed to know him. Cremation rites have been accorded. Graveside services will be 11:00 AM, Tuesday, December 22, 2020 at the Victoria Cemetery in Victoria IL. Rev. Tim Anderson will officiate. Military rites will be conducted at the graveside. Hurd-Hendricks Funeral Homes and Crematory of Knoxville has been entrusted with arrangements. Memorials may be donated to the Immanuel Lutheran Church of Altona or to Fresenius Dialysis Center, 3300 N Main Street, East Peoria, IL 61611. Due to COVID-19 restrictions, face masks and social distancing will be required. On-line condolences and expressions of sympathy may be made through www.hurd-hendricksfuneralhome.com To send flowers or a memorial gift to the family of Lester DeWayne Carlson please visit our Sympathy Store.
To send flowers to the family in memory of Lester DeWayne Carlson, please visit our flower store.