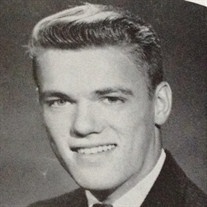 Larry F. Carlson, 77, Dahinda, passed away late Thursday evening, November 3, 2016 at home. He was the son of Lawrence “Bud” and Virginia (Godsil) Carlson. Larry was born August 12, 1939 in Galesburg. He married Marilyn Gibson, October 13, 1963. He is survived by his wife of 53 years; two daughters, Ann Marie (Stan) Widlacki of Naperville and Denise (Kevin) O’Tool of Bettendorf, Iowa.; three grandsons, Drew, Joshua and Luke; two granddaughters, Angela and Sydney; his brother-in-law and sister-in-law, Howard and Phyllis Gibson; niece Paula Ferguson and nephew Matt Gibson; and numerous cousins. He was preceded in death by his parents, his in-laws and his infant sister, Jennifer. Larry was raised and educated in Knoxville, was captain of the football team, and graduated with the Class of 1957. He served in the United States Army from 1957–1960. Larry was very active in the purebred Suffolk sheep industry and participated in shows and sales throughout the country. Visitation will be on Monday, November 7, 2016 at Hurd-Hendricks Funeral Home in Knoxville from 10:00am-11:00am. Graveside services will be held on Monday, November 7, 2016 at 11:30 AM at the Knoxville Cemetery with Military Rites conducted by the VFW #2257/ Legion #258 Veterans Honor Guard. Rev. Russell Collister will officiate. Memorials may be made to Maxey Chapel United Methodist Church. Online condolences may be sent through www.hurd-hendricksfuneralhome.com. To send flowers or a memorial gift to the family of Larry F. Carlson please visit our Sympathy Store.
To send flowers to the family in memory of Larry F. Carlson, please visit our flower store.