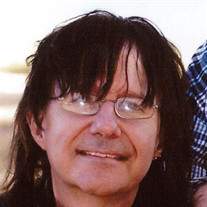 L. Wade Williams, 55, of Knoxville passed away on July 28, 2017 at 3:16 P.M. at his home in rural Knoxville, Illinois. He was born on February 3, 1962 in Harrison, Arkansas, the son of Larry W. and W. Lois (Ford) Williams. He attended and graduated from Knoxville High School in 1980. After high school, Wade began working at his family owned business, the former Protexall, Inc., finally becoming president. He attended Carl Sandburg College to obtain an Associate’s Degree in Graphic Design. He graduated in May of 2012 with high honors and received the Outstanding Graphic Design Professional Student Award. He was a member of Phi Theta Kappa. After college he worked for Knoxville School district in IT. He met Janet K. Wilson on May 4, 1982 and they married on October 4, 1997 at their home in Knoxville. Wade is survived by his wife; Janet of Knoxville, Illinois; his son, Corey Williams of Knoxville, Illinois; brother, Robby (Michelle) Williams of Knoxville, Illinois; family pet, Bandit; and many nieces, nephews, aunts and uncles and special friends. He was preceded in death by his grandparents, parents and a brother; Danny Williams. He enjoyed motorcycles, music and watching sports His favorite teams were Chicago Cubs and St. Louis Blues. He played guitar in local bands, opening for “Brother Cane” on December 12, 1995 and also “Cry of Love” on August 2, 1997 in Peoria, Illinois. He also enjoyed coaching little league, flag football, and basketball. Visitation will be held from 5:00 to 7:00 P.M. on Wednesday, August 2, 2017 at the Hurd-Hendricks Funeral Homes & Crematory in Knoxville, Illinois. Graveside services will be held at 11:00 A.M. on Thursday, August 3, 2017 at the East Linwood Cemetery, Galesburg, Illinois, with Rev. Jeremie Kilgore officiating. In lieu of flowers, memorial contributions may be made to the family to be designated at a later date. To send flowers or a memorial gift to the family of L. Wade Williams please visit our Sympathy Store.
To send flowers to the family in memory of L. Wade Williams, please visit our flower store.