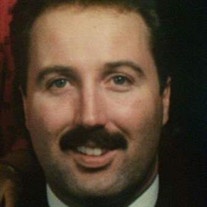 Kevin Bertis Rickard, 53, of Knoxville, died at 4:58 P.M. on Sunday, May 14, 2017 at his home, after a long battle with Multiple Sclerosis. Kevin was born on April 28, 1964 in Galesburg, Illinois the son of Frederick W. “Bill” Rickard and Mary Lou (Wilson) Rickard. He graduated from Galesburg High School with the class of 1982. Kevin worked as a supervisor for Maytag in Galesburg, Illinois. He is survived by his son, Tyler K. Rickard of Galesburg, Illinois; his parents, Bill (Kathy) Rickard of Morton, Illinois and Mary Lou West of Knoxville, Illinois; his brothers Keith (Michelle) Rickard of Knoxville, Illinois, Tim (Dawn) Rickard of Gilson, Illinois; his sister Luan (Wayne) Statham of Galesburg, Illinois; his half-sister Kirsten (Mike) Schaub of Morton, Illinois; his step-sisters Tonja (Chris) Gonzales of Galesburg, Illinois, Ellen Hankins of New Port Richey, Florida, and Kimberly (B.J.) Stone of Island Lake, Illinois and numerous nieces and nephews. Kevin was preceded in death by his step-father, Oley L. West; his maternal grandparents, Claude and Mayme Wilson; his paternal grandparents Frederick S. Rickard and Violet Rickard Williams; his step-grandmothers, Ruth V. West and Louise Thomas; and many aunts and uncles. Kevin was an avid fan of the St. Louis Cardinals and the Green Bay Packers. He also loved hunting and fishing. Visitation will be held on Friday, May 19, 2017 from 5:00 P.M. – 7:00 P.M. at the Hurd-Hendricks Funeral Home in Knoxville, Illinois. Funeral Services will be held Saturday, May 20, 2017 at 11:00 A.M. at the Hurd-Hendricks Funeral Home in Knoxville, Illinois with Rev. Gary Bryan officiating. Burial will be in the Gilson Cemetery in Gilson, Illinois. Memorials may be made to a charity of the donor`s choice. Hurd-Hendricks Funeral Home in Knoxville is in charge of arrangements. Online condolences can be made at www.hurd-hendricksfuneralhome.com. To send flowers or a memorial gift to the family of Kevin B. Rickard please visit our Sympathy Store.
To send flowers to the family in memory of Kevin B. Rickard, please visit our flower store.